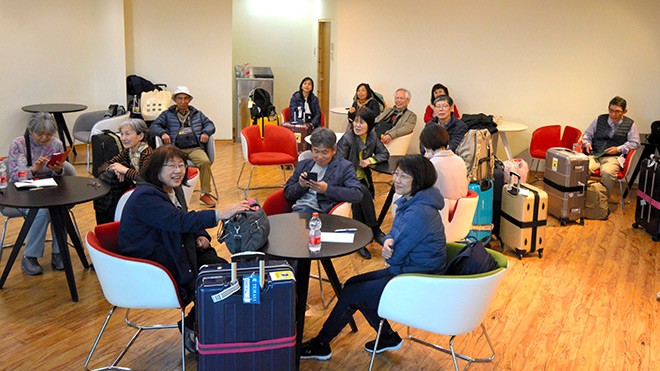 Japanese tourists at Israel's Ben Gurion airport on Feb. 24 who were not allowed to board their flight due to concerns that they might be carrying the coronavirus (The Asahi Shimbun)

Last week a subway train was brought to a screeching halt in the city of Fukuoka.

A passenger pressed an emergency button when someone coughed in the car. The “offender” was not wearing a face mask.

The public’s fear of catching the new coronavirus is understandable.

But what worries me is that people seem to be becoming more oversensitive by the day, something I am guilty of as well.

A Japanese woman who has temporarily returned from China lamented the chilly reception she received while looking for a kindergarten to send her child to.

She went to check out one prospect, only to be told to do so “from outside the fence.”

Medical personnel who have tended to infected people are being treated badly, according to the Japanese Association for Disaster Medicine.

Some have been shunned like “germs” at their workplaces. Others have been forced by their superiors to apologize for engaging in on-site activities.

I also understand that Japan has come to be regarded with apprehension abroad.

Kazakhstan last week announced that people arriving from Japan, Hong Kong and other regions will be placed under medical observation for 24 days.

Thailand is urging its people to postpone travel to Japan, and the Pacific island nations of Kiribati and Tuvalu have designated Japan as a “high-risk country.”

What stunned me more than anything were the experiences recounted by my colleague who is stationed in the Middle East. On the streets in Israel, passers-by repeatedly point their fingers at him, shouting “corona.”  Some even cover their mouths for show.

It appears that other Asians are also receiving similar treatment.

The government’s basic policy guidelines released on Feb. 25 contain a disturbing line: “We will implement necessary measures to ensure that children who are temporarily back from China will be admitted to schools and be free from bullying.”

The sad reality is that the government has to spell out such things to appeal to the public’s common decency.

Even this virulent virus outbreak will eventually come to an end. I only pray that by then, our society will not have been scarred too deeply and beyond recovery.

Indonesia leans on healthtech startups to cope with virus