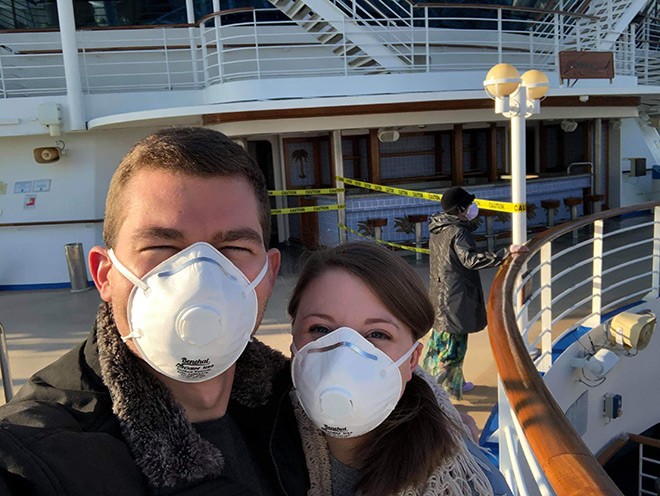 For newlyweds Tyler and Rachel Torres, a cruise aboard the Diamond Princess seemed to be the perfect honeymoon.

It was to be a relaxing, romantic getaway from their hectic daily lives for a while.

The couple, both 24, showed off their room on the cruise ship. Inside was a refrigerator, stocked with wine, and two twin beds put together. Crew members delivered food to their room.

But they ended up getting more than they bargained for.

Tyler Torres, a trauma nurse in the Dallas-Fort Worth area of Texas, and his wife, Rachel, an occupational therapist, were quarantined, stuck really, on the cruise ship docked at Yokohama Port.

A passenger from Hong Kong had tested positive for the infectious coronavirus, putting their honeymoon and the fate of the passengers and crew in limbo.

The night the quarantine was first announced, the couple was enjoying a performance by the Princess Cruise’s crew, called "Showtime."

“They had announced on board, ‘Hey everybody, we have a confirmed case of coronavirus that there was a passenger from Hong Kong, stay tuned for announcements,' " Tyler said.

The show went on and after returning to their room, they heard that no one would be allowed to leave their rooms until further notice. They would be stuck in quarantine for two weeks.

“They started working at about midnight to screen everybody. They went from the top deck to the bottom deck, and they had a group of three guys who were taking temperatures. And they were just asking, ‘How are you feeling? And they collected a questionnaire,” Tyler said. They were not allowed to leave their room.

Tyler joked that it was a surreal experience, thinking that while things like this happened to other people, “That probably won't ever happen to me.”

He and his wife were forced to live in their rooms 24/7, going out on deck four times for an hour when it was allowed, with crew members delivering their meals due to the quarantine. They passed the time playing cards and watching movies provided by the ship in their cramped room.

“When you walk in the door, they have just enough room to walk straight up to the king size bed,” Tyler said.

Since they were quarantined in their rooms, Tyler could not use his medical training to help out, although he did assist someone in Taiwan who passed out during a tour excursion.

“Shikata ga nai.” (It can't be helped.) Tyler and Rachel took this to heart as they endured weeks on the cruise ship, cut off from their new Japanese friends they made before the quarantine.

Rachel said that her husband is the calmer of the two.

“He’s a ‘control what you can and let go of what you can’t’ kind of person, whereas I want to control everything.”

But the initial lack of information worried them.

“Whenever all the ambulances were out, they had everybody at the side of the ship, and people getting pulled off of the ship. We found out on the news two or three hours before an announcement was made,” Tyler said.

They washed their clothes in their bathroom sink, a major change of pace from when they learned about the "yukata" casual kimono and spoke to Japanese passengers. Now the only Japanese they could hear was from the captain who made periodic announcements over the public address system.

They did not eat sushi, but instead dined on pasta and Cokes. They spent Valentine’s Day inside their room, receiving a rose and some chocolates.

On it went for the next two weeks until the U.S. Embassy in Tokyo e-mailed them on Feb. 15.

U.S. officials planned to fly out their citizens and quarantine them stateside, but the American passengers had to decide if they would accept the offer since they wouldn’t be able to leave until March 4 if they declined. Suddenly, the end seemed within reach.

Their bags packed, they waited for hours until early Sunday morning when they were finally called and disembarked the ship.

They boarded a bus outside the ship. Then they waited again.

“We were in the bus for about six hours,” Tyler said.

But finally, on Feb. 16, they landed at Lackland Air Force Base outside  San Antonio, Texas.

The couple had adopted Japanese customs and manners, which proved hard to shake. When they arrived at Lackland, the Americans waved at them.

“Here we are just bowing our heads, and they just kind of looked at us like, ‘OK, you just keep doing that,' ” Tyler said.

They are still under quarantine at Lackland.

“We have twice the space, which is really nice. And we were very blessed to have that.” Rachel said.

They can also receive care packages. U.S. medical workers from the Centers for Disease Control and Prevention checked on them instead of the Japanese. Tyler’s wife cried tears of joy as she ate Mexican-style rice for the first time since they boarded the cruise.

That isn’t all they’re grateful for.

“On the boat, the Japanese officials were running the show so information would be passed to the Princess afterward so it would be hours sometime before hearing the number count (of those infected) that day. Here they are working hard on transparency,” Rachel said.

Tyler offered a take on what Japanese health officials could have done differently.

"I think the crew should have been been quarantined similarly to us, and I don't know if Japan has any disaster management similar to what we have here," he said.

Before leaving the ship, Tyler smuggled out a souvenir from the cruise they'll never forget. He took two salt and pepper shakers. They are scheduled to be released from quarantine on March 2.

They plan on returning to visit Japan in the near future. The next time over, they said, they will travel by train.

Eddy Martinez is a staff reporter at The Asahi Shimbun's New York Bureau.