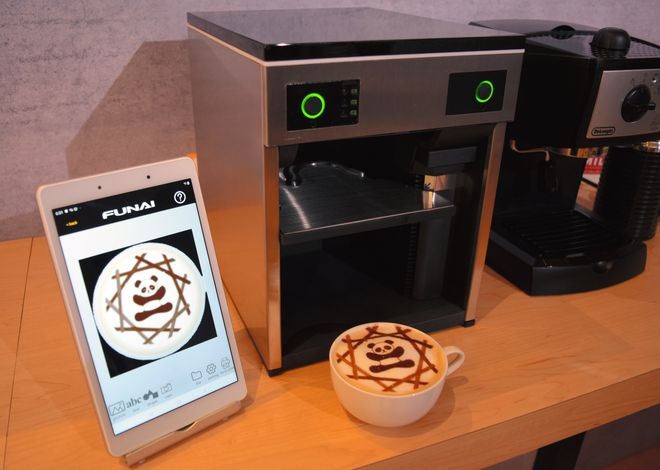 A financially struggling home appliance manufacturer is seeking a rebound with new printing machines that do not work on sheets of paper.

Funai Electric Co.’s new machines deploy the name technology that sprays ink to create paper printouts, but they are instead used to make intricate designs in coffee and on fingernails and food.

The company’s latest nonpaper printer is a latte art machine that can produce high-quality patterns on the surface of the drink.

A box-shaped component used on a cup of espresso can finish a panda design with edible brown ink applied to the foam within several seconds.

The printer was displayed at the CES international trade show in Las Vegas in January.

The patterns for the lattes are selected on a dedicated app on tablet computers. Designs can be added by scanning images.

Funai Electric is looking to sell the product to cafe chains and other coffee-related operators both in and outside Japan.

The company is known for its TV products, but it also makes printers. It decided to develop paper-free printers because the market for ordinary printers is dominated by major electronics manufacturers, such as Canon Inc. and Seiko Epson Corp.

Funai Electric’s first nonpaper printer directly puts art on fingernails. It drew much attention when it released in June last year in Japan for individual consumers.

The nail art machine is now available in South America, and the company plans to sell it in China and North America.

During this year’s CES, Funai Electric unveiled a new printer for artificial nails that it believes will be a hit among nail salon operators.

Funai Electric reported sales of 70.2 billion yen ($636 million) for the April-December period in 2019, down 13.3 percent from the same period in the previous year. Although the company posted a net profit of 700 million yen a year before, it suffered a net loss of 1.5 billion yen in the latest three quarters.

The poor results were attributed to sluggish TV sales in North America.

“The nonpaper printer market will grow,” a Funai Electric public relations official said. “We expect significant growth in the future.”

Another paperless printer developed by Funai Electric paints cookies and other foodstuffs. It can also be used to depict famous characters and other designs in boxed meals for children, according to the company.