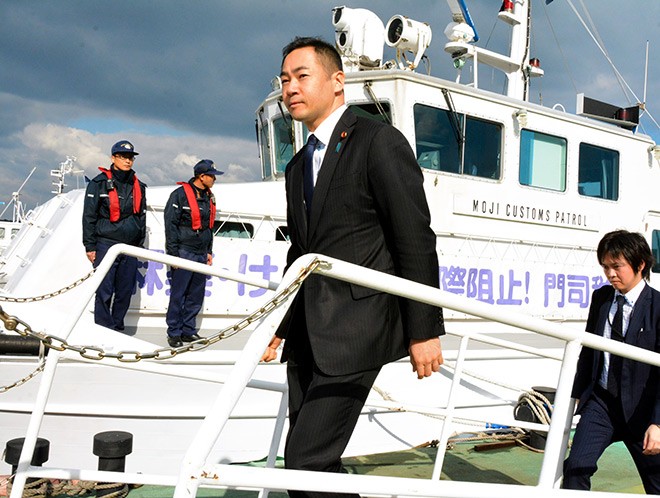 Keisuke Suzuki, center, during an inspection of Moji customs in Kita-Kyushu last December when he served as a senior Finance Ministry official (Asahi Shimbun file photo)

A state minister for foreign affairs refused to make a cash donation to a private relief initiative by the ruling party to help China contain the coronavirus outbreak, citing a territorial dispute between the two countries and Beijing’s handling of anti-government protests in Hong Kong.

“(Raising relief funds for China) means that Japan will aid the very nation taking hostile action against it,” Keisuke Suzuki said in his blog on Feb. 24. “It could send a wrong message to the Chinese authorities.”

Suzuki is a Lower House member of the Liberal Democratic Party.

The LDP intends to hand over the donations to the Chinese Embassy in Tokyo.

Whether to chip in is up to each party member.

Suzuki said in his blog, “As a state minister of foreign affairs, I do not agree to the relief aid.”

In an interview with The Asahi Shimbun, Suzuki said he wrote the blog to explain his decision to refuse to donate.

The same day, Foreign Minister Toshimitsu Motegi touched on Suzuki’s blog at a news conference, stating that Suzuki voiced his objection as an LDP lawmaker, not as a state minister of foreign affairs.

“My understanding is that each party member is making donations at their discretion,” he said, adding that, “I have donated as a lawmaker.”

Toshihiro Nikai, secretary-general of the LDP, said at a news conference the same day: “The party has made no attempt to influence each member's decision. We have not heard anything from the government (about the issue).”

He expressed his intention to make a donation.

On Feb. 10, Nikai announced that 5,000 yen ($45) would be deducted from the March salaries of LDP members for the relief program.

But the policy decision was changed after a conservative group within the party complained Feb. 14 that it should not be mandatory.

(This article was written by Yuka Takeshita and Tatsuro Kawai.)