Fishermen in Fukushima now free to ship all catches of fish 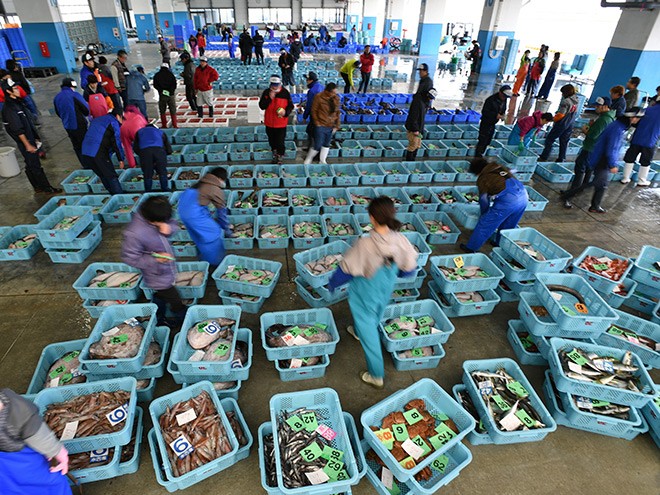 People in the fishing industry, including fishermen and brokers, work briskly on Feb. 7, 2019, at the Matsukawaura fishing port in Soma, Fukushima Prefecture. (Yosuke Fukudome)

The last restrictions on fish taken off Fukushima Prefecture were lifted on Feb. 25, freeing fishermen here to ship any species caught in the area.

A ban was imposed on ocellate skate after one caught in the area was found to have levels of radioactive cesium exceeding the government standard of 100 becquerels per kilogram in January 2019.

The government task force on the Fukushima nuclear disaster removed restrictions on the bottom-feeding species related to rays after the prefecture measured levels in about 1,000 fish, and found none exceeded the standard.

The maximum amount found in the fish was 17 becquerels.

The prefecture has since asked the government to lift the restrictions.

Restrictions were placed on 43 species of fish caught off the coast of the prefecture following the 2011 accident at the Fukushima No. 1 nuclear power plant.

The restrictions were lifted in stages after the safety of the fish was confirmed, with some fishing allowed on a trial basis.

In 2019, with trial fishing on limited days and in specified areas, the annual catch from the area stood at 3,584 tons, only about 14 percent of that in 2010, a year before the nuclear disaster.