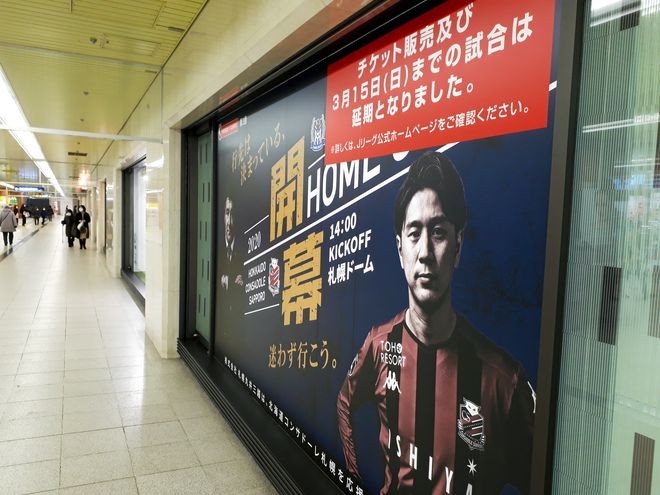 The red paper attached to this J.League soccer poster in Sapporo’s Chuo Ward notifies fans that all Consadole Sapporo games scheduled until March 15 are postponed. (The Asahi Shimbun)

In the final months of World War II, senior officials of the Japan Sumo Association found themselves in a tight spot.

With no respite from persistent Allied airstrikes, the officials were not even sure if they would be able to hold the upcoming Summer Tournament.

Ultimately, the tournament did take place at the Ryogoku Kokugikan in Tokyo. As a safety precaution, however, the association barred the public from attending, making this the first "tournament behind closed doors" in the history of professional sumo.

And now, many Japanese athletic organizations are faced with the same quandary that beset the wartime sumo association.

I believe it is safe to say that the situation at hand is unprecedented in the history of professional sports in Japan.

As if to underscore this, the longest-serving member of the International Olympic Committee dropped a bombshell on Feb. 25.

In his interview with The Associated Press, Dick Pound, a former Canadian swimming champion, said that unless the current situation--which he described as a "new war"--is brought under control, the organizers of the Tokyo Olympics will consider canceling the event, and that they will have to make their decision by the end of May at the latest.

However, the AP report quotes Pound as reassuring athletes, “As far as we all know, you're going to be in Tokyo ... All indications are at this stage that it will be business as usual. So keep focused on your sport."

In other words, it was apparently not his intention to suggest that the Tokyo Olympics and Paralympics are doomed.

Still, his remarks must have made many people uneasy about the future of the Games.

Prime Minister Shinzo Abe on Feb. 26 urged the public to "cancel, postpone or downsize national sporting and cultural events for the next two weeks."

The impact of the viral outbreak is certainly hitting us harder now and intensifying our sense of crisis.

Regarding the wartime sumo tournament mentioned at the start of the column: Although it was meant as a "closed-door event," fans actually flocked to the Kokugikan every day, and the tournament ended up as a "free admission" affair.

That was 75 years ago. But with the coronavirus going around this spring, I suppose all fans must practice restraint for their own safety.