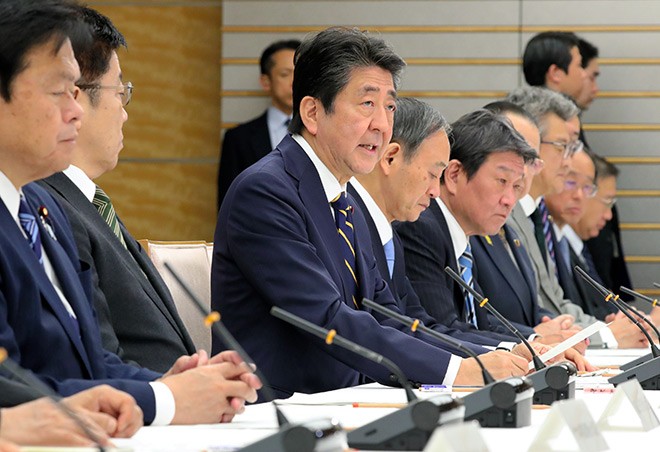 Prime Minister Shinzo Abe speaks at a task force meeting on responding to the novel coronavirus outbreak on Feb. 26 at the prime minister’s office in Tokyo. (Takeshi Iwashita)

The government’s overnight change in policy on holding sporting and cultural events amid the spread of the new coronavirus has further eroded faith in the Abe administration’s ability to battle the outbreak.

Opposition parties and local leaders have expressed frustration over the administration’s decision-making process on measures to contain the disease.

“The central government needs to step up its response,” said Tomikazu Fukuda, the governor of Tochigi Prefecture.

Prime Minister Shinzo Abe on the afternoon of Feb. 26 officially requested organizers to postpone, cancel or scale down large sporting and other public events for two weeks as a COVID-19 preventive measure.

Abe requested the voluntary ban with mass-gathering events, such as the Spring Grand Sumo Tournament and preseason games of professional baseball, in mind.

“We will continue to pay close attention to the trends and take action in order to expend all available resources to prevent the spread of the virus,” Abe said.

But the previous day, the government announced basic anti-coronavirus guidelines that said, “We will not request a voluntary blanket ban on (holding events) at this point.”

Abe’s Feb. 26 pronouncement came as a surprise for many. Others suggested it was a spur-of-the-moment decision in a health crisis that has been developing for weeks.

Government officials said the change was made after Abe heard the opinions of a COVID-19 panel of experts that met on Feb. 24 in Tokyo.

“It was a political decision,” the official said. “(Abe) decided to strongly urge organizers to voluntarily cancel events after the government panel of experts announced that the next one to two weeks will be a make-or-break moment.”

Chief Cabinet Secretary Yoshihide Suga also said, repeatedly, that Abe’s decision to change the policy was based on the panel’s recommendations. But Suga did not comment on whether the latest decision contradicted the government’s basic guidelines.

The government has already come under fire at home and abroad over its handling of the epidemic, particularly on the quarantined Diamond Princess cruise ship. Passengers, crew members and government officials who were on the ship make up the majority of infection cases confirmed in Japan.

The government appears discouraged by the mounting criticism from the public and foreign news media. Some recent public opinion polls have shown a significant drop in the Abe Cabinet’s approval ratings.

A high-ranking official at the prime minister’s office said in frustration, “(The administration) has been severely criticized on the internet, but criticizing is something that anyone can do.”

“(The administration) released basic guidelines, which were criticized for their ambiguities,” Yuichiro Tamaki, head of the Democratic Party for the People, said to Abe at a Lower House Budget Committee session. “You should have stated ‘two weeks’ in the guidelines from the get-go. The fact that the government has taken reactive approaches one after another is the No. 1 reason for the public to hold nagging worries.”

Japan ‘not planning’ a virus lockdown, but entry bans loom