OLYMPICS/ Tokyo organizing committee: The Games will go on as planned 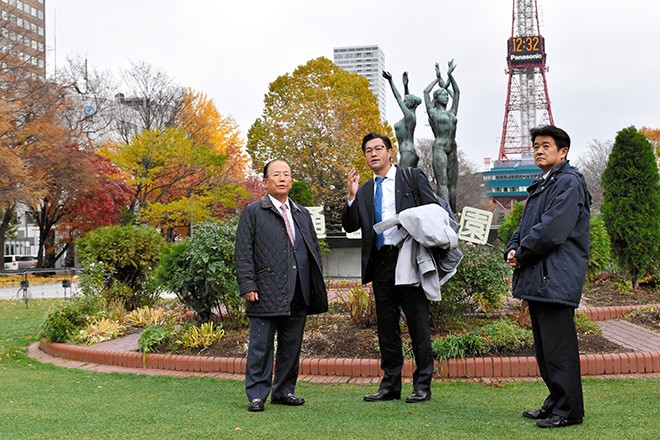 Toshiro Muto, left, CEO of the Tokyo Organizing Committee of the Olympic and Paralympic Games, inspects the site in Sapporo to be used for the marathon race this summer. (Asahi Shimbun file photo)

The Tokyo Olympic organizing committee on Feb. 26 squashed speculation raised by an International Olympic Committee member that the spreading coronavirus outbreak could force cancellation of the Summer Games in the Japanese capital.

“We stand by the precondition that the Games will proceed as scheduled," said Toshiro Muto, CEO of the Tokyo Organizing Committee of the Olympic and Paralympic Games.

He was responding to a comment attributed by a U.S. news agency to Dick Pound, an IOC member, which indicated that a decision would have to be made by late May on whether to hold the Olympics in Tokyo.

Muto said that the organizing committee had received a response from the IOC that its view was contrary to what Pound espoused.

In response to an inquiry from The Asahi Shimbun, an IOC official in charge of public relations replied in an e-mail: “The preparations for the Olympic Games Tokyo 2020 continue as planned. We have full confidence that the relevant authorities, in particular in Japan and China, will take all the necessary measures to address the situation.”

At the same time, officials of the Tokyo organizing committee are well aware that the IOC has the authority to unilaterally take action it deems necessary.

Recently, the IOC decided to move the marathon and race walking events from Tokyo to Sapporo out of concern for the health of the athletes competing in the humid Tokyo summer.

A senior official of the Tokyo metropolitan government said, “The IOC is an organization that is very sensitive about public opinion. I believe there is an option of canceling the Games.”

But the official added that such a decision would pose a huge headache because of the large amounts already spent by the Tokyo metropolitan government to prepare for the event.

The contract that the Tokyo metropolitan government and organizing committee signed with the IOC has a specific provision that states an Olympics can be terminated “if the IOC has reasonable grounds to believe, in its sole discretion, that the safety of participants in the Games would be seriously threatened or jeopardized for any reason whatsoever.”

The contract also states that if the Games cannot be held in 2020, it would be canceled, meaning the possibility of delaying the start of the Tokyo Olympics from July 24 would be virtually impossible.

Three past Summer Olympics were canceled due to world wars, instead of being delayed.

Even a Tokyo organizing committee official admitted that it would be unrealistic to even think of postponing the Games because it was more than likely that the venues were already booked after the Olympics and Paralympics. In addition, it would be problematic to reserve the accommodations and transportation needed for participants.

Japan ‘not planning’ a virus lockdown, but entry bans loom