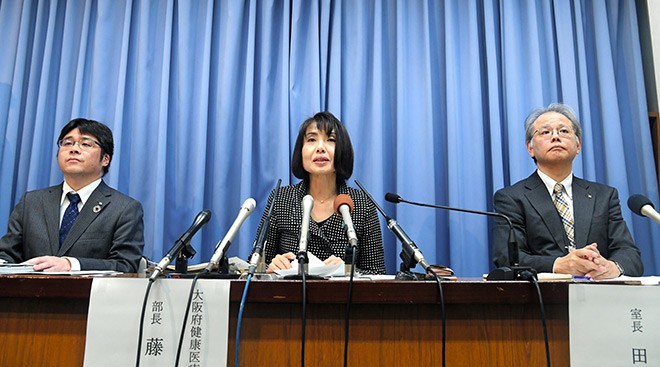 Mutsuko Fujii, center, chief of the Osaka prefectural government’s health and medical care department, announces at a news conference in Osaka on Jan. 29 that a woman was infected with the new coronavirus. (Asahi Shimbun file photo)

OSAKA--A woman who was infected with the new coronavirus in January has tested positive a second time after being discharged from a hospital, Osaka prefectural government officials said Feb. 26.

She tested negative on Feb. 6 but tested positive again on Feb. 26 apparently because the earlier test was unable to detect the hidden virus or if she was newly infected with the virus, the officials said.

The woman, who is a foreign national in her 40s, has refrained from going to work and stayed at home to rest since she was discharged from the hospital on Feb. 1. No one has been in close contact with the resident of Osaka city.

She had complained of discomfort in her throat and chest pain since Feb. 19, 13 days after she tested negative on Feb. 6.

“The point is how the central government will see the case and what it will say,” she told a news conference on Feb. 26.

The woman was confirmed infected with the coronavirus on Jan. 29, becoming one of the nation's first cases.

She is thought to have contracted the virus while working as a tour guide on a bus that transported tourists from Wuhan.

She remains the sole individual infected with the coronavirus in Osaka Prefecture.

Under government guidelines, infected patients can leave the hospital if they test negative 48 hours after they stop exhibiting severe virus symptoms and pass another test conducted more than 12 hours later.