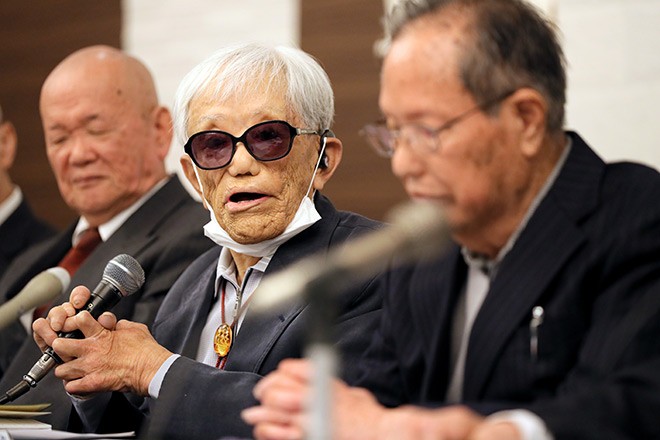 Yasushi Shimura, center, one of the plaintiffs in the lawsuit filed at Kumamoto District Court, speaks with reporters on Feb. 26 after the court’s ruling. (Jun Kaneko)

KUMAMOTO--A court ruled that special trials involving leprosy patients dating back more than 70 years were unconstitutional, but it refused a retrial for an executed man who was convicted at one of these “discriminatory” proceedings.

Lawyers for the plaintiffs called the Feb. 26 ruling at the Kumamoto District Court unprecedented.

But they said they would continue fighting for a retrial to clear the name of the suspected leprosy patient who was convicted of murder and sentenced to death at a special trial in the 1950s.

The special trials were held outside ordinary courtrooms until 1972.

At that time, leprosy, or Hansen’s disease, was considered an infectious illness, and if a Hansen’s disease patient was expected to appear in court, a special trial was held to prevent the spread of the disease.

The court law allows the holding of trials outside of a courtroom if the Supreme Court decides that a judicial procedure cannot be held because, for example, the court has been damaged by a natural disaster.

The Supreme Court, in a report compiled in 2016, said that legal provision should not have applied for the court appearances of leprosy patients. The report said the special trials for Hansen’s disease patients were illegal from 1960, and the top court apologized to the former patients.

The lawsuit filed against the government concerned a special trial held in the 1950s at the National Sanatorium Kikuchi Keifuen in Kumamoto Prefecture.

A man suspected of having Hansen’s disease was convicted of murder and given the death sentence, which was carried out in 1962.

Regarding that trial, the district court said, “There were no rational grounds for holding the special trial based on the scientific view at that time.”

The ruling said the trial was unconstitutional because the defendant was not treated equally under the law as guaranteed by the Constitution.

The court was also scathing in its criticism of the judges and prosecutors involved in the case: “When handling evidence, they wore gloves and picked up the items using chopsticks.”

Such actions taken against people with Hansen’s disease were discriminatory because they lacked any rational ground, the ruling said.

The ruling added that the special trial also violated Article 13 of the Constitution, which states that all people should be respected as individuals.

The proceedings may also have violated the constitutional provision for open trials because the public could not in effect visit the sanatorium where the special trial was held, according to the court.

But the court rejected the request for the retrial on grounds that the special trial would not have had any direct effect on confirming the facts if they had been presented in a criminal trial at an ordinary court.

The district court also noted that the plaintiffs in the lawsuit--six former Hansen’s disease patients--were not directly related to the man who was hanged.

After the man’s conviction, his family members did not request a retrial because they also feared discrimination. Although the convict’s lawyers asked for a retrial, prosecutors refused to comply.

The plaintiffs said they filed the lawsuit because they felt that prejudice and discrimination against former patients still existed.

Yasuyuki Tokuda, who headed the legal team, welcomed the part of the ruling that called the special trials unconstitutional. He said the ruling pushed back the time when special trials should have ended in comparison with the Supreme Court’s report.

“It takes courage for a lower level judge to make a ruling that goes against a Supreme Court report,” he said. “The court was forced to respond in a sincere manner to the questions raised by the plaintiffs who wanted a judgment made on the court (that handled the special trial).”

Lawyers said they would continue seeking a retrial to restore the honor of the man who was executed.

Hideo Inoue, a professor emeritus of law at Kanazawa University, said it was regrettable the court did not agree to a retrial.

“The general feeling is that a proper trial could not have been held amid an atmosphere of harsh discrimination,” Inoue said. “The ruling is contradictory because it recognized discrimination but was unable to reflect that view and call for a retrial.”

(This article was compiled from reports by Hisatoshi Tanaka, Yuta Ichijo, Ryo Ioka and Nanami Watanabe.)