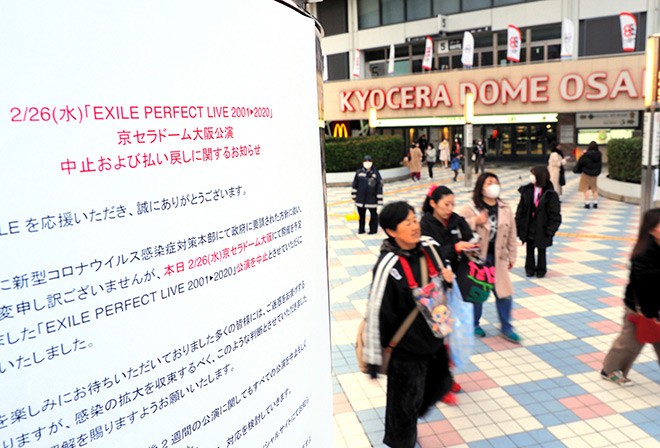 A notice at the Kyocera Dome in Osaka announces that the concert of the J-pop group Exile has been canceled on Feb. 26. (Tatsuo Kanai)

Instead of hit songs and the cheers of fans, confusion and disappointment were the strains heard as concerts and sporting events were called off to prevent the spread of the new coronavirus.

On the evening of Feb. 26, security guards over loudspeakers at Tokyo Dome announced the cancellation of a concert by popular all-girls techno-pop group Perfume that night.

Perfume had performed in concert the night before at the venue, and refunds were given to ticket holders unable to attend, an unusual measure.

However, after Prime Minister Shinzo Abe on Feb. 26 urged national sporting events and cultural events to be canceled, postponed or downsized for the next two weeks, the organizer of the Perfume concerts announced the cancellation of that evening's concert on its website.

Many fans came to the venue unaware that the performance had been called off.

A 21-year-old university student living in Fukaya, Saitama Prefecture, learned of the cancellation while driving to Tokyo Dome with his three friends.

The fan said that he was planning to enjoy the concert with the face masks and sterilization safeguards he brought to protect from being infected with the virus.

Instead, he ended up just buying a towel and T-shirt at the venue.

“I wanted to see the concert while using these goods,” the disappointed Perfume fan said.

“If we continued holding a concert, we would have the image of committing treasonable action," one of the organizers said.

The cancellations and postponements of sporting events are also continuing.

On Feb. 26, at an executive committee meeting, the professional basketball B.League decided to postpone a total of 99 B1 and B2 league games scheduled from Feb. 28 to March 11.

B.League Chairman Masaaki Okawa referred to a scenario in which the coronavirus epidemic continues and league games are unable to resume.

“The losses of all 36 teams would total 6 billion yen ($54 million) at the greatest," Okawa said. "It will have such an impact that what we established over three years after the founding of the B.League could all be blown away."

Nippon Professional Baseball held an emergency meeting with representatives of Japan’s 12 professional baseball teams in attendance. NPB decided that the rest of the spring training games, 72 in all, will be played with no fans present.

It will mark the first time that preseason games are played without spectators.