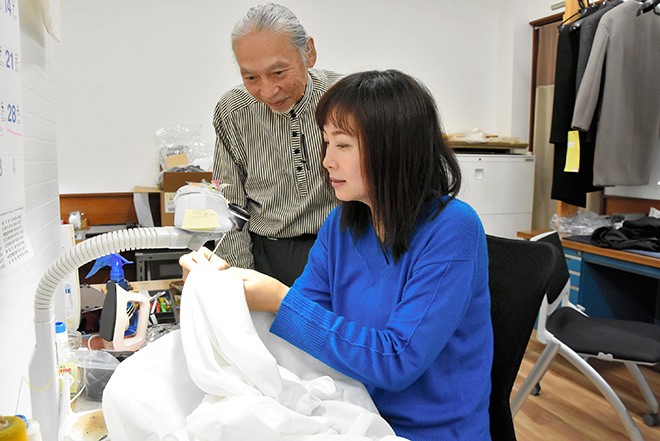 MINOKAMO, Gifu Prefecture--Yoshiko Goto never imagined that she would have a U.S. audience watching her fix a 2-centimeter hole in a twilled wool garment.

Some 200 people broke into applause after the artisan deftly repaired the clothes during a demonstration in New York City.

“I could not keep my hands from shaking from the strain,” Goto, 42, said, recalling her appearance at Japan Society in May last year.

Her stint in New York City started from a nondescript request to mend a damaged satin kimono.

The father and daughter had the opening, about several cm per side, literally vanish, although it was a densely woven, complex fabric.

The request came from the online kimono laundry service Yokohama Choujiya, which was looking for experienced kimono restoration artisans for a Japan Society session.

Oriwa Giken’s craftsmanship was considered by far the best among the stores contacted.

The footage showing her performance also spread globally, and messages of praise were posted in English and Spanish.

Goto said the experience in the United States inspired her to set a new goal.

“I want to receive orders from overseas customers and make kaketsugi a globally recognized word,” she said.

Kataoka and Goto hope to figure out the structures of fabrics from around the world that they have never encountered.

“There are still many fabric structures I am not familiar with,” Kataoka said. “I look forward to tackling the challenge.”

Kataoka took over his family tailor shop but switched to the repair business in his 30s because cheaper, ready-made clothes were gaining popularity. He has written in a notebook how various fabrics are structured and woven.

Kataoka has also improved tools and techniques over the years.

For example, he sharpens and bends commercially available needles to create his own. He also collects threads from such parts as pockets and the back of its hem and repairs the garment using the original weaving method.

Kataoka passes a thread 10 times over a 1-millimeter strip, where it normally requires two or three times, and fills an opening in the way it becomes invisible to the naked eye.

Oriwa Giken opened a website in 2016 to accept orders from across Japan.

Many customers cannot bring themselves to throw away long-cherished items, including automotive seats and traditional "hina" dolls.

Some have turned to the father and daughter to eliminate the remaining traces of repairs by other clothes restoration businesses.

Kataoka and Goto said they take the greatest pleasure from seeing their customers delighted when their clothes are given a new lease on life.

“I am proud of my job because once-damaged clothes can be used for a long time in this age of material abundance,” Kataoka said.