‘River’ timetable a big hit with train passengers and enthusiasts

The “river” timetable that lists times when trains operated by Shikoku Railway Co. cross a bridge over the Yoshinogawa river system (Go Takahashi) 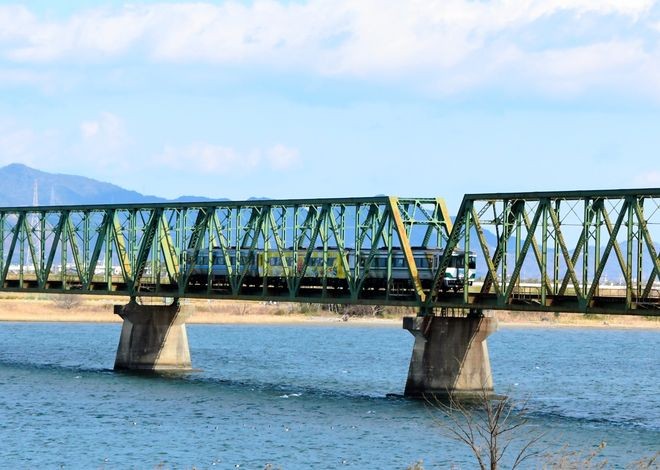 An Uzushio limited express train crosses an iron bridge over the Yoshinogawa river on Jan. 13 in Tokushima city. (Go Takahashi)

TOKUSHIMA--Train timetables are a bible by which train buffs live. And now Shikoku Railway Co. (JR Shikoku) has gone a step further by printing up schedules to show when its trains approach bridges over rivers in Tokushima Prefecture.

The initiative has drawn a positive response from train enthusiasts as it allows them to lie in wait at riverbanks to capture that "magic" moment when a train approaches. Train passengers have also given a thumbs up to the project.

The timetable was created by the transport ministry’s Tokushima Office of River and National Highway based in Tokushima city. It covers 48 bridges that span the Yoshinogawa river or its 33 tributaries in the prefecture.

The waterway flows mainly within the area where JR Shikoku operates five railway lines, including the Tokushima, Naruto and Dosan lines that traverse the river basin.

The timetable states where a river and railway tracks converge, or “river crossing.” Just like any train timetable, it lists when trains are due to get there.

Instead of names of stations, names of rivers fill the far-left column of the “river” timetable. The uppermost row shows all limited express and local trains running in the morning, daytime and evening.

The Yoshinogawa river flows from Kochi Prefecture, which lies southwest of Tokushima Prefecture, and is nicknamed “Shikoku Saburo,” meaning that it is prone to overflow its banks. The river snakes its way through scenic spots, such as the Oboke and Koboke gorges in Miyoshi, Tokushima Prefecture, and empties into the sea in Tokushima city. Along the way, it is joined by tributaries that increase the water flow as the river approaches the sea.

“Enjoy the area with its beautiful river landscape,” says a staff member of the office.

The river timetable is the brainchild of Hideyuki Miyafuji, 50, who heads the office. In 2000, when he was working at the now-disbanded Hokkaido Development Agency, Miyafuji drew up his first such timetable covering major rivers and JR lines in the northernmost main island.

At the time, he made several round trips for business each month between Sapporo, the capital, and Kushiro in eastern Hokkaido by limited express train. He got interested in the names of the rivers he saw from the train window.

He created his first timetable for train passengers, and was surprised at the enthusiastic response he got from those who love taking pictures of trains.

Miyafuji was transferred to Tokushima Prefecture in July 2018. He and his colleagues began working on a second river timetable, hoping it would promote the natural beauty of the Yoshinogawa river and its intertwined tributaries.

Using conventional railway timetables as a reference, they worked out the time each train crosses the river by calculating the distance between the bridge and stations that sandwich the bridge. It took about five months to complete the timetable.

“The midstream and downstream of the Yoshinogawa river flow in an east-west direction, so sunrise and sunset are both beautiful,” said Miyafuji.

He hopes his new timetable will encourage more people to travel by train and so help to revitalize the rail network.

Copies of the timetable are available at service counters of JR Tokushima Station as well as the official website of the Tokushima Office of River and National Highway: (http://www.skr.mlit.go.jp/tokushima/)

This reporter loves riding trains, so I took a trip with the timetable in hand. Smartphones offer immediate access to such information, but a timetable printed on paper has its own special charm.

My favorite scenic moment was crossing the second Yoshinogawa river bridge, located between Koboke and Oboke stations on the Dosan Line in Miyoshi. The train crossed the bridge exactly on time, so I didn’t miss the magnificent view when it crossed through the gorges between the exit and the entrance of tunnels.