The parahawking program allows a paraglider to fly with a hawk. (Video by Takefumi Horinouchi and Masanari Iyono) 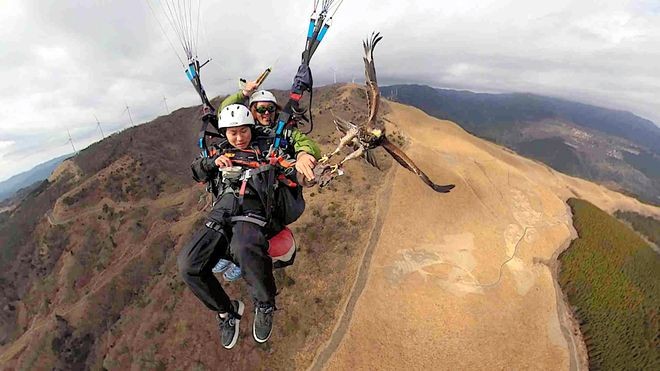 The hawk flies off after eating food on a human’s arm over Higashi-Izu in Shizuoka Prefecture on Feb. 7. (Provided by Masanari Iyono)

HIGASHI-IZU, Shizuoka Prefecture--Masanari Iyono certainly knows how to make an appearance, showing up with a hawk landing on his extended left arm.

For anyone who has ever wanted to fly like a bird and have a bird's-eye view, Iyono, 49, is your man. He is a flight instructor at the Izu Flight House paraglider school here, which is offering Japan's first parahawking service, a combination of paragliding and hawking.

The bird of prey that landed on Iyono's arm, a Harris's hawk named Uin, is 7 months old. Its brown feathers extend straight in the same direction, and its beak appeared sharp.

Although the bird still looked young, its piercing eyes add an air of dignity typical of a raptor.

When Iyono took off for a tandem flight, where two people take to the skies together, the scenes 400 meters below, such as a fishing port in the Inatori district, Izu-Oshima island and the Pacific Ocean behind them, were difficult to view because the paraglider was being buffeted and tilted by strong air currents.

Iyono blew a whistle to summon Uin. But no matter how many times he whistled, the hawk did not appear. Given that Uin was finally found flying several tens of meters behind, the bird was seemingly scared of the paraglider’s unstable motions and thus could not approach it.

In a short time, the air became stable and the wind stopped buffeting the paraglider. Uin came near and landed on the glove-worn, stretched left arm of Iyono’s companion so it could peck at the meat of a pheasant. After finishing eating, Uin flew off.

The program did not end there. The associate quickly pulled meat out of a box and held it in his left hand and then thrusted his arm horizontally. Hearing the whistle, Uin alighted on the left arm again. The process was repeated many times.

Preparing for the hawk’s landing is stressful and glancing down at the landscape below is horrific, so it was not easy to take in the view slowly and fully enjoy the flight with the raptor.

Customers may, however, feel as if they are a bird when flying with Uin in the wind while viewing the landscape below.

Following the flight, which lasted less than 10 minutes, Iyono lauded Uin for “his devotion.” Clinging to its master, Uin appeared smarter and stronger than before the parahawking flight.

Parahawking is said to have been first attempted in Nepal about 15 years ago to take flights with the bird species. According to the Izu Flight House, it is Japan’s only parahawking provider, at least at present.

Iyono loved birds so much since he was in elementary school that he joined a group of adult fowl lovers to observe birds in nature. He started taking to the air with paragliders when he was 19 to “fly like a bird,” and has since worked as an instructor for about 30 years.

Learning of parahawking in a magazine article three years ago, Iyono, who had once enjoyed a paraglider flight near a wild hawk, decided to take on a new challenge to “fly closer” to the species.

Because it was the first time he kept a bird, Iyono said he was initially not confident that he could communicate well with the raptor.

The first Harris's hawk Iyono kept was too timid to fly near paragliders. To make his second hawk, which is two years older than Uin and called Kanon, deem his left arm as a safe place, Iyono spent three to five hours a day with the bird resting on it.

Iyono would also go out with his pet to win its confidence by protecting the raptor from cars and dogs. Spending much time with the hawk made Iyono realize that the bird sometimes expresses anger and affection.

“I thought the species cannot understand what humans are thinking, but that is not the case,” he said.

Iyono said he can never forget the impressive moment he succeeded in paragliding with the hawk in 2018 following a four-month training period, and that the pleasure was not about flying with a hawk but his beloved pet’s growth.

“I was as happy as when seeing my kid becoming able to ride a bicycle,” he said.

Thinking many people would want to fly like a bird and it would be “inappropriate to keep the amusing experience to myself,” Iyono began offering a parahawking experience to the public earlier this year.

Iyono said he has received positive responses from his customers. One was “surprised that I can have such an experience,” while another described parahawking as a “fantasy-like” program.