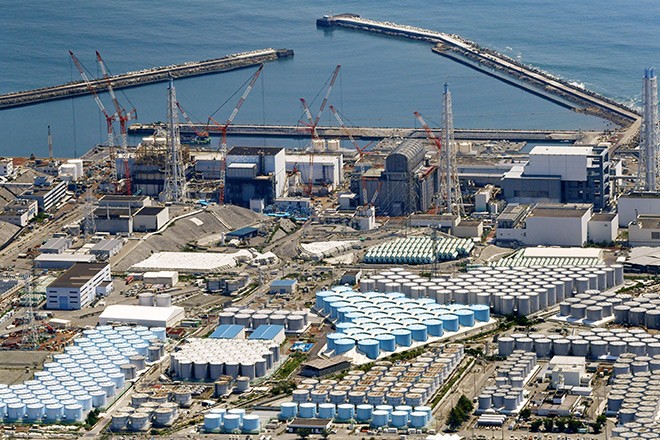 Fifty-seven percent of respondents to a poll in Fukushima Prefecture say they oppose the government's plan to release tons of contaminated water from the Fukushima No. 1 nuclear power plant into the ocean.

In the survey, conducted by The Asahi Shimbun and Fukushima Broadcasting Co. on Feb. 22-23, 31 percent supported the plan.

About 1.2 million tons of water contaminated with radioactive substances are in storage tanks at the crippled plant, operated by Tokyo Electric Power Co.

The government plans to remove most of the radioactive substances from the water and release the diluted portion into the ocean.

Respondents who are in their 40s are most likely to support the plan, as 41 percent back the plan.

However, more respondents opposed the plan in every age group.

Asked about damage caused by harmful rumors surrounding the release of the contaminated water, 89 percent of the respondents said they were “very much” or “somewhat” concerned.

Even among those who supported the plan, 79 percent said they were worried about the possible damage.

Only 23 percent said they approved of the central government and TEPCO's handling of the contaminated water problem. That was up from 14 percent in last year’s survey.

Still, 57 percent of the respondents said they did not approve of the handling of the contaminated water.

The government has committed to disposing of waste substances, including contaminated soil removed in the decontamination work, within 30 years and locating a final waste disposal site outside of Fukushima Prefecture.

“We will do our best to keep the promise,” Environment Minister Shinjiro Koizumi has pledged.

Asked if the promise will be kept, 80 percent of the respondents said they did not think so “at all” or “very much.”

Only 17 percent said they thought the government will keep the promise “very much” or “somewhat.”

Fukushima Prefecture will be the starting point of the months-long nationwide torch relay for the 2020 Tokyo Games.

In other questions, 69 percent opposed resuming operations of nuclear power plants that have been idle since the Fukushima nuclear accident, while 11 percent supported it.

In a nationwide survey conducted by The Asahi Shimbun on Feb. 15 and 16, 56 percent opposed the resumption, while 29 percent supported it.

The two media companies have conducted a phone survey of eligible voters in Fukushima Prefecture since the 2011 Great East Japan earthquake, tsunami and nuclear disaster. The recent survey was the 10th.

Landline phone numbers were randomly selected by computer and then called by survey staff. Of these, 1,883 belonged to eligible voters. The survey received a total of 1,035 effective responses with the response rate at 55 percent.