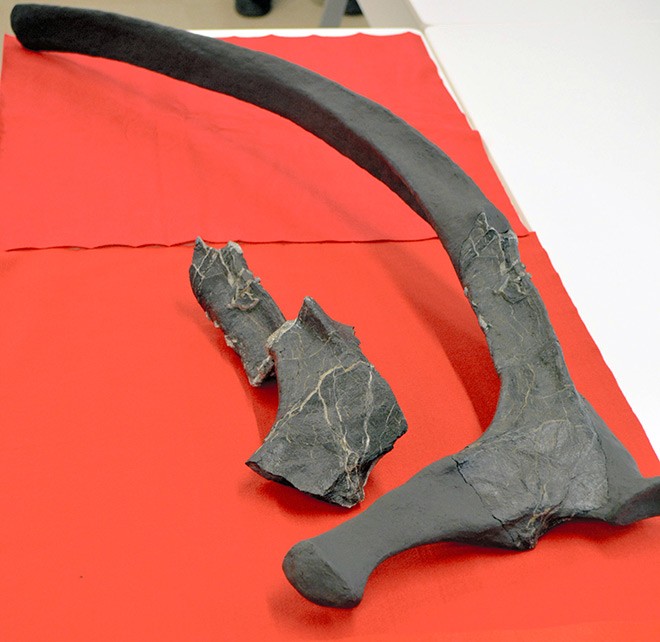 The unearthed rib bone, left, and the reconstructed one on Feb. 27 in Amakusa, Kumamoto Prefecture (Masahiro Ohya)

AMAKUSA, Kumamoto Prefecture--A rib bone fossil from about 100 million years ago is believed to be from the second largest dinosaur to have roamed Japan, researchers said.

The fossil, from a herbivore, was excavated from a stratum on Goshourajima island in the city, according to an announcement on Feb. 27 by two museums that jointly conducted the research.

The fossilized piece of the rib bone is 42 centimeters long, 18 cm wide and 9 cm thick. A reconstruction of the entire bone measures 1.4 meters long.

The researchers estimated the overall length of the dinosaur at about 15 meters, making it the largest ever found in Kyushu.

Another plant-eating dinosaur whose fossils were unearthed in Toba, Mie Prefecture, is still considered the largest one in Japan.

The rib bone fossil is one of dozens excavated from the Eboshi stratum in the Goshoura strata at a stone quarry in the southern part of the island during research by the Amakusa city-run Goshoura Cretaceous Museum in 1999.

The bone at first was believed to be part of the upper arm of an ornithopod dinosaur.

But joint research that started in 2013 by the Goshoura Cretaceous Museum and the Fukui Prefectural Dinosaur Museum in Katsuyama city revealed the bone to be part of a right rib bone of a sauropod, which had long necks and tails and walked on four legs.

“Fossils of sauropods from the Lower and Upper Cretaceous periods (145 million years to 66 million years ago) had been excavated in Kyushu,” said Koji Hirose, a curator of Goshoura Cretaceous Museum. “The discovery of a fossil in a stratum from about 100 million years ago shows that Kyushu had long been home to sauropod dinosaurs.”