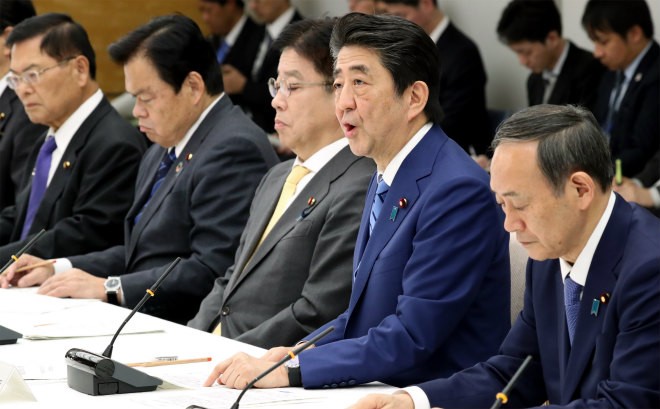 Prime Minister Shinzo Abe called on all elementary, junior and senior high schools in Japan to close from March 2 until the spring break as an emergency step to contain the spread of the new coronavirus. Abe's out-of-the-blue request on Feb. 27 is causing a great deal of confusion and dismay across the nation.

Taking all possible measures swiftly to bring the outbreak under control is crucial for the government's efforts to manage this crisis.

But Abe's abrupt request for all schools to cancel classes for a month, a step that was not even discussed by a council of experts advising the government on the battle against COVID-19, will seriously disrupt many people's daily lives.

During a Feb. 28 Lower House Budget Committee session, Abe stressed that it was his own decision, saying it was the political leadership's duty to get on top of the situation.

If so, Abe needs to speak directly to the public and explain his reasons for taking this unusual and radical step and the government's plans to respond to the public disquiet that resulted.

Abe made the surprise announcement at a meeting of the government's task force to cope with the epidemic that was held on the evening of Feb. 27.

Some 13 million children attend elementary, junior and senior high schools and schools for special-needs children across the nation.

A tremendous number of people will be affected in one way or another by the measure, including local government officials in charge of school operations, teachers, parents and segments of the working population.

Abe's announcement effectively gave all these people just three weekend days to figure out how to respond to the problems that will result from this measure. It would not be surprising if many people find themselves at a loss over what to do.

The decision will raise a raft of sticky questions. How will it be possible to compensate for canceled classes, for instance? What should be done with scheduled term-end examinations and graduation ceremonies? Will it be possible for working parents of young schoolchildren to absent themselves from work to take care of them? What will happen to the wages of such working parents for the days off they take?

Only a small number of top officials at the education ministry were informed of Abe's decision before it was made public.

It was only after the announcement that the ministry started notifying boards of education around the nation of the decision.

The decision was apparently made without advance consultation with other government organizations tasked with working out specific details, such as coordinating with the labor ministry, which is in charge of supervising childcare centers.

In a statement issued on Feb. 24, the expert advisory panel said the next one to two weeks would be crucial for the efforts to contain the outbreak. But it made no suggestion concerning school closures.

In stating the guiding policy principles for tackling this public health care challenge, the government only said Feb. 25 that prefectural authorities should ask schools in their jurisdictions to suspend classes if necessary.

Some members of the advisory panel have voiced skepticism about the step. One member said the expert advisers were not asked for nor offered their opinions about the measure. The official added there is no solid science to suggest the measure will be effective.

The government is certainly racing against the clock in its battle to stamp out the epidemic, which means situations can arise that require quick and bold decisions.

Abe is to hold a belated news conference on Feb. 29 to explain the drastic action to the public.

If he fails to offer convincing answers to questions from anxious people, he will not win public support for his decision.

In Taiwan, anger at China over virus drives identity debate