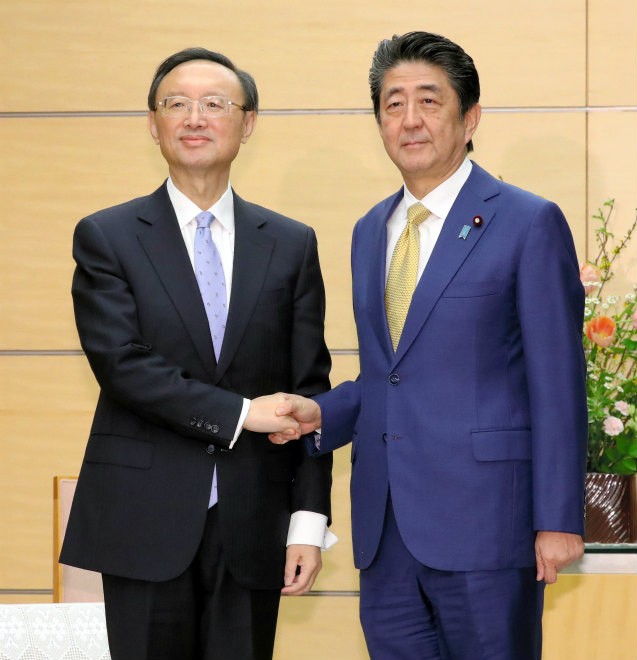 Preparations were continuing for a scheduled state visit to Japan in early April by Chinese President Xi Jinping as speculation mounted it will be called off due to the coronavirus outbreak in the two countries.

If it is postponed, the earliest Xi could reschedule the trip would be in autumn, officials said.

Yang Jiechi, the Chinese Communist Party Politburo member who serves as the nation’s top diplomat, was in Tokyo on Feb. 28 for a round of meetings to discuss Xi's planned itinerary in Japan.

While no decision was reached about whether to go ahead with the plans, sources said the coronavirus crisis made it increasingly difficult to coordinate a schedule for Xi’s visit.

Yang paid a courtesy call on Prime Minister Shinzo Abe, who said a visit by Xi was “extremely important for bilateral relations." But he cautioned that thorough preparations were needed to ensure the trip would bear fruit.

Prior to that meeting, Yang met with Foreign Minister Toshimitsu Motegi, who told reporters afterward that there was no change at present to the plans for Xi’s visit.

Abe invited Xi for a state visit when they met in June 2019 in Osaka on the sidelines of the Group of 20 summit meeting. At the time, Abe told Xi, “We would like to welcome you to Japan as a state guest next year when the cherry blossoms are blooming.”

The administration viewed a visit by Xi as a way to bolster its sagging fortunes. The last state visit by a Chinese president was in 2008 when Hu Jintao came.

Government officials kept insisting that there were no changes to the planned visit in early April even as the coronavirus spread, first in China and now in Japan.

But the outbreak sidelined officials on both sides trying to prepare for the trip. They have been so preoccupied with dealing with the health crisis in their respective nations that even teleconferences could not be held, a Foreign Ministry official said.

A growing number of infections in Japan has also cast dark clouds over planning.

On Feb. 27, in his daily news conference, Chief Cabinet Secretary Yoshihide Suga for the first time indicated the possibility of a postponement, saying that the visit should only go ahead after thorough preparations had been made.

But any postponement would lead to further difficulties coordinating the schedules of officials of the two nations. A government source said if Xi’s visit was put off, a state visit would not likely be held until autumn at the earliest.

One reason is that having Xi as a state guest would mean an audience with Emperor Naruhito would have to be set. However, autumn would be the earliest when both the emperor and Abe have openings in their calendars.

In Beijing, a Communist Party source said Yang went ahead with his visit to Japan despite the fact both nations were grappling with the coronavirus because the Chinese government wanted to stress the importance it places on ties with Japan.

Although the official position is that the Xi visit is still being planned as scheduled, an increasing number of government and party sources are also now saying that a postponement may be unavoidable.

One reason Beijing wanted to go ahead with the visit was to dispel the image that China was becoming increasingly isolated as more nations implemented bans on the entry of Chinese nationals as well as restrictions on Chinese imports due to the coronavirus outbreak.

However, as the pace at which inspections increased slowed in provinces outside of Hubei, where the outbreak started, there were increasingly optimistic assessments that the Xi visit would go ahead as planned.

But that mood has greatly changed in recent days with reports of growing infections across Japan.

A Chinese diplomatic source said that Beijing had already begun inquiring about events planned for Naruhito from April and beyond, a sign that Chinese officials were thinking ahead about a state visit later in the year.

“It will be difficult to go ahead with the visit unless the situation arises in which Xi’s state visit to Japan is welcomed by the peoples of the two nations,” said a Communist Party source.

(This article was written by Yuki Nikaido and Narumi Ota in Tokyo and Takashi Funakoshi in Beijing.)