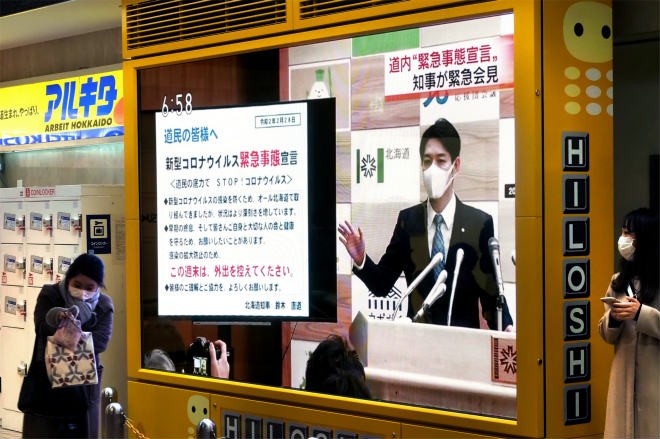 A screen at a Sapporo underground mall broadcasts a news conference by Hokkaido Governor Naomichi Suzuki on Feb. 28. (Yoshinori Toyomane)

SAPPORO--The governor of Hokkaido declared a state of emergency Feb. 28 and called on residents to remain indoors over the weekend due to spreading coronavirus infections.

With 66 cases, Hokkaido not only has the highest number of infections in Japan, but numbers have increased drastically in recent days. Twelve new cases were confirmed on Feb. 28.

In addition, Naomichi Suzuki pointed out that at least six infections can be linked to a products fair held Feb. 13-15 in Kitami, one of Hokkaido's main cities.

Three of those infections were traced to residents who returned to their residences in Sapporo, Hokkaido’s capital. In light of this, Suzuki said there was a need to prevent a further spread of the coronavirus by curtailing visits to major cities as much as possible.

“The precious lives and health of our residents are irreplaceable,” Suzuki said at a Feb. 28 news conference. “I ask for your understanding and cooperation.”

While Suzuki acknowledged his declaration of an emergency had no legal basis, he called for the measures to remain in place for three weeks until March 19.

“We are now at a critical juncture when it comes to restricting the effects on local residents as much as possible,” Suzuki said. “Unprecedented steps are called for because the situation is worsening.”

Suzuki met in Tokyo with Prime Minister Shinzo Abe on Feb. 29 and requested appropriate assistance to stop the spread of the coronavirus.

Suzuki indicated that if Hokkaido could stop the infection in its tracks it would serve as a model for other prefectures.

Hokkaido had taken a number of measures to deal with the coronavirus.

Even before Abe requested all schools to close from March 2, Hokkaido authorities decided from Feb. 27 to close about 1,700 schools on the island.

But the following day, a boy under the age of 10 was among the 12 new infections confirmed.

Suzuki explained that he was asking residents to refrain from going out over the weekend because there have been cases of those with only minor symptoms testing positive for the coronavirus.

Suzuki said that if residents converged on major cities over the weekend and became infected, they might end up spreading the virus in the local communities they return to.

Hokkaido will be plunged into a crisis if the number of infections keeps rising. Many of those confirmed with the coronavirus are being treated at designated medical institutions with special facilities to deal with infectious diseases. However, there are only 94 beds in all of Hokkaido that can provide such treatment.

(This article was written by Akihiro Toya and Junichiro Nagasaki.)