Seeds of flower that bloomed after A-bomb headed to space 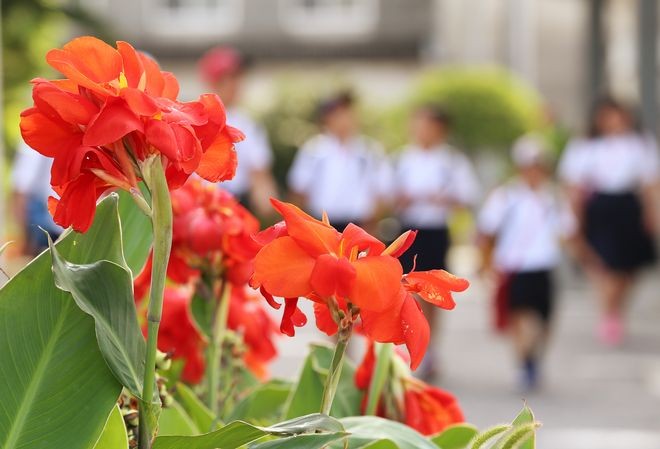 Tokyo teacher Riho Tachibana had given up on her project to send seeds of the flower species canna, which survived the 1945 atomic bombing of Hiroshima, into space because she could not cover the costs.

But when she apologized to students of a disabled children's school in Hiroshima that provided the seeds, a boy told her that "canna is a flower that showed how important not giving up is, and you can raise money through donations."

"The child taught me a lesson in turn, while I had been talking about the significance of patience for students," said Tachibana, 62, who teaches etiquette to students and others, referring to the surprise she felt at the time.

She learned how to solicit contributions on the internet and started a crowdfunding campaign in late 2018. She raised the 2.4 million yen ($22,100) needed from 130 individuals to make her project a reality.

The seeds were launched aboard a rocket of U.S. aerospace manufacturer SpaceX from an air base in Florida on March 7, bound for the International Space Station.

After spending six or so months in orbit, seeds of the plant, which is known to have borne red flowers in the bombed-out ruins of Hiroshima, will be returned to Earth by the end of 2020.

After their return, the seeds will be distributed to 20 elementary and junior high schools that offered them, along with other public facilities, so they can bloom next summer.

As August will mark the 75th anniversary of the atomic bombing of Hiroshima, Tachibana and other project members expect the seeds, which will lead to the future, to watch the blooming canna flowers at schools and the Earth from space in those days.

ROOTS OF HER EFFORT

In 2004, Tachibana was stunned by the destruction from the atomic bomb she learned about during her visit to the Hiroshima Peace Memorial Museum.

There, however, she saw a black-and-white photograph of canna flowers blooming amid the ashes of the city, which made such a strong impression on her that the flowers appeared to be bright red.

"The plant had flowers in Hiroshima, where trees or plants were said to never grow again, and thus represents the 'never-give-up spirit' and hope," said Tachibana.

Acting on the thought that the story of the plant should be more widely known, Tachibana, who loves to write stories, presented her work about canna flowers to pupils at an elementary school in Hiroshima.

As the children said they did not know the species, Tachibana hit upon the idea of having them raise the plant to learn about it. Touring elementary schools around the blast center of the atomic bombing, Tachibana asked the children "to take care of canna every day to think of peace."

Her proposal was willingly accepted by school operators as part of their programs to show students the significance of a world free of war.

At the educators' request, Tachibana delivered speeches themed on not only nuclear weapons and peace but also the importance of patience to fight bullying and other difficulties, referring to the strength of canna.

Hearing about Tachibana's project from third parties, other schools offered to join to culture canna. Tachibana provided bulbs of the plant developed by pupils to those schools across the nation to "pass the baton of peace."

Currently, 191 schools from Japan's 33 prefectures as well as those in 16 countries all over the world are working on the program.

The plan to send canna seeds to space was proposed in 2013, when an acquaintance of Tachibana, who was involved in the project to carry plant seeds from the private sector into orbit, recommended that "canna seeds be launched."

As Tachibana thought it would be a good opportunity to publicize canna and Hiroshima, she collected seeds from schools across Japan until autumn 2017.

Along with the canna seeds, children's messages were launched to the ISS.

One of the students wrote, "Have flowers of peace and hope bloomed?" while another wants "the seeds to be distributed to various places to build a bridge to peace."

Kanako Tanigawa, 12, a sixth-grader at Nagasaki Seido Elementary School in Nagasaki Prefecture, who donated seeds, said her great-grandmother--a hibakusha survivor--would tell her about how horrific the atomic bomb was.

"It is unbelievable but fantastic that the canna seeds we developed out of our aspirations for peace we nurtured based on lessons from the past will go into space," Kanako said.

Tachibana also said, "I want the seeds to send a patient message of peace and hope to children from the universe."