No need to panic; there’s plenty of toilet rolls, tissue paper for all 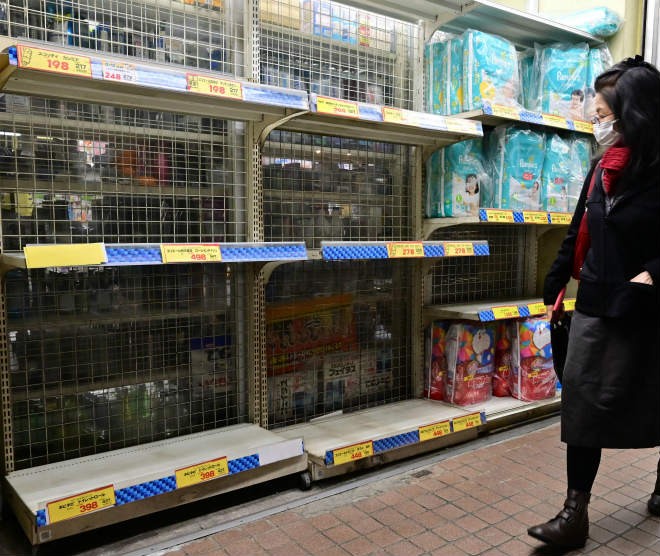 A consumer at a drug store in Tokyo’s Suginami Ward searches in vain for toilet rolls or tissue on the store’s shelves. (Hiroyuki Yamamoto)

Panic-buying of toilet rolls and tissue paper prompted industry and government officials to issue a plea to the public Feb. 28 not to be taken in by rumors of a nationwide shortage of the essentials.

“There is a sufficient supply and inventory of toilet and tissue paper," Hirofumi Hayashi, chairman of a national association of paper manufacturing companies, told a news conference the same day. "While some regions may be experiencing temporary difficulties in purchasing sufficient supplies, consumers have no reason to worry if they abide by normal shopping habits. I urge people to remain calm.”

At another news conference the same day, Naoki Okada, a deputy chief Cabinet secretary, said, “We ask for the public’s cooperation so a situation does not arise in which those who desperately need toilet paper are unable to get their hands on it due to hoarding or reselling.”

Posts to social media spread in recent days sparked the run on toilet paper due to fears about the coronavirus. Some said face masks, which are also in short supply, are made from the same materials used to manufacture toilet paper, while others urged people to hoard toilet rolls.

One drug store in Tokyo was forced to post signs at its outlets on the afternoon of Feb. 28 saying all toilet and tissue paper had sold out.

The store manager said 20 or so people formed a line at the two cash registers as soon as the store opened for business at 7:30 a.m. All toilet and tissue paper in stock sold out in no time.

A homemaker in her 70s who purchased toilet paper in the morning noted that stocks quickly ran out in the face of the rumors.

The store manager expressed fears that hoarding would result, much like what happened with face masks. Given that distribution channels were not cut of, as happened in the immediate aftermath of the 2011 earthquake and tsunami disaster, he predicted the shortage would be short-lived.

The store was expected to receive its regular supply at the start of the new week.

Industry officials said pulp is used to manufacture toilet paper, unlike the unwoven cloth needed to make face masks. Moreover, most of the pulp is derived from either domestic or North American lumber.

Some misleading rumors said the shortage was due to difficulties in importing toilet paper from China.

Officials noted that only 2.5 percent of the 1.06 million tons of toilet paper shipped out to retail outlets in Japan came from China in 2019.

Production of toilet and tissue paper is continuing at normal levels and many companies have an ample inventory because consumers limited their purchases after the consumption tax rate was raised from 8 percent to 10 percent last October.

(This article was written by Eisuke Eguchi and Fumiko Kuribayashi.)