Tokyo Disneyland in Urayasu, Chiba Prefecture, is closed on Feb. 29, the first day of its emergency closure. (The Asahi Shimbun) 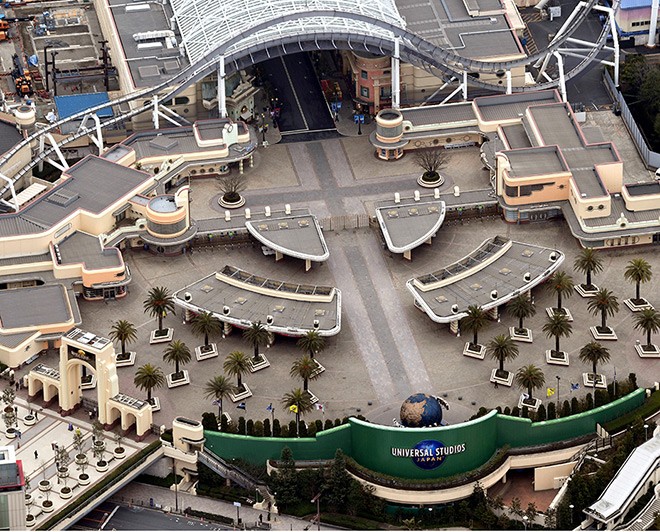 The Universal Studios Japan theme park in Osaka is closed on Feb. 29, the first day of its emergency closure. (The Asahi Shimbun)

Eerie scenes of emptiness and silence were the rule on Feb. 29 around Japan as theme parks closed and preseason games played in deserted ballparks in an attempt to halt the spread of the coronavirus.

The measures marked the first weekend after Prime Minister Shinzo Abe called for a voluntary ban on mass-gathering events.

Tokyo Disney Resort, east of Tokyo, and Universal Studios Japan in Osaka shut their entrances on Feb. 29, the first day of their emergency closures through March 15.

The operators announced the measure on Feb. 28, two days after Abe requested organizers to cancel, postpone or scale down large sporting and cultural events for two weeks as a COVID-19 preventive measure.

Chisato Kudo, 49, learned of USJ’s closure plans on Feb. 28, her birthday, after she flew to Osaka from Aomori Prefecture with her son, who had given her a ticket as a present.

“I am really disappointed because my son celebrated my birthday,” Kudo said.

At Tokyo Dome, the Yomiuri Giants played a preseason game against the Yakult Swallows before empty stands on Feb. 29.

Without fans chanting and the usual musical accompaniments at the game, the clatter of a roller coaster at an adjacent amusement park reverberated in the stadium.

The Giants were the first among the nation’s 12 professional baseball clubs to announce plans for closed-door games on Feb. 25.

All spring training games will be staged without spectators until March 15 to prevent the spread of the coronavirus.

At Tokyo Girls Collection, models showed off the latest fashions on the catwalk without an audience at Tokyo’s Yoyogi National Gymnasium on Feb. 29.

Organizers had planned to implement anti-infection measures and allow an audience in, but changed plans and broadcast the show live over the internet.

In Hokkaido, few people were seen in Sapporo, Furano, Hakodate and other tourist spots on Feb. 29, a day after Governor Naomichi Suzuki declared a state of emergency and called on residents to remain indoors over the weekend.