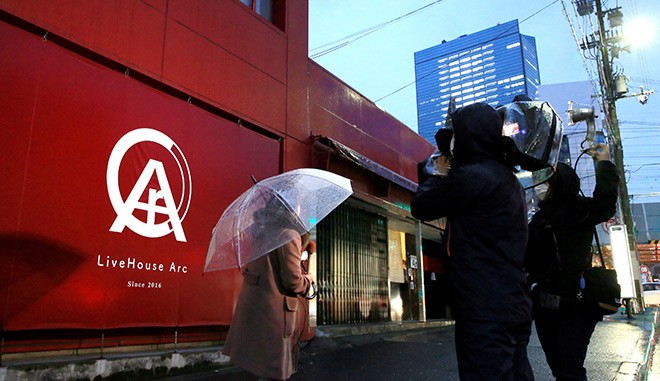 The Osaka Kyobashi Live House Arc in Osaka’s Miyakojima Ward. Three people who were at a live concert at the venue in February tested positive for the new coronavirus. (Taku Hosokawa)

OSAKA--A live concert held here with 100 people in the audience last month may have transmitted the new coronavirus as three people who were at the event tested positive for infection, authorities announced on Feb. 29.

Osaka Governor Hirofumi Yoshimura, naming the venue, urged at a news conference that people who attended the concert should stay alert for any signs of the disease.

“Please contact local officials promptly if you start having symptoms and refrain from going out unless it is essential,” he said.

The live concert was given at Osaka Kyobashi Live House Arc in the city’s Miyakojima Ward on Feb. 15.

Yoshimura said he identified the venue in the hope of stemming clusters from spreading, suspecting the concert venue turned into a hotbed of infection with so many people in an enclosed place.

On Feb. 29, officials with the Kochi prefectural and municipal governments announced that a nurse in her 30s who works for an orthopedics clinic in Kochi and attended the live concert in Osaka was infected by the virus.

Among those at the venue on Feb. 15 were two men in their 40s, whose infections had been confirmed in Sapporo on Feb. 25 and in Osaka Prefecture on Feb. 27, respectively.

The men, who live in Osaka Prefecture, were among the staff for the concert. They were at another live concert at the same venue on Feb. 16.

The wife and the preschool daughter of the man whose infection was confirmed on Feb. 27 also tested positive for the coronavirus, according to Osaka prefectural officials.

The wife, who is in her 40s, works for a hospital in Higashi-Osaka in the prefecture.