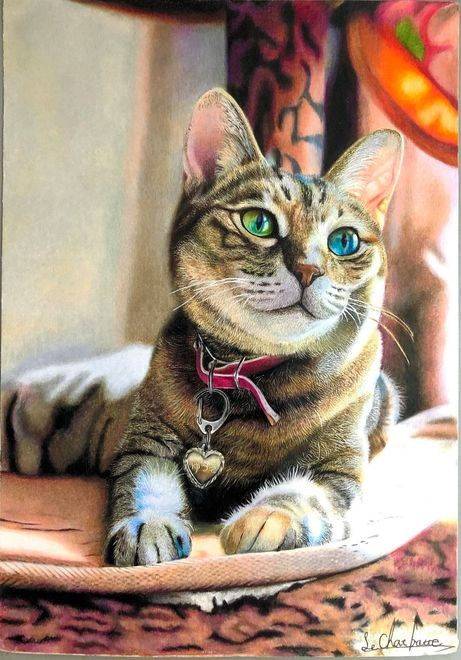 Abe, who goes by the name of "Nagagutsu o Haita Neko" (Booted cat), worked on a colored pencil sketch of a cat on a piece of B5-sized paper in the two-day live drawing event.

He used colored pencils to add colors to the picture as he answered questions from the spectators.

"When do you find it worthwhile?" an onlooker asked, to which Abe responded, "When I feel I 'breathed life' into the drawing."

His drawing was so photorealistic that many people couldn't help but sigh in amazement and stop to watch.

"Wow. It looks like a photograph," one of them said.

The third-year senior high school student's colored pencil drawings caused such a buzz on social media that he launched a professional career.

Abe, 17, is drawing attention for his photorealistic works done in exquisite strokes.

After the public event at the Isetan department store, Abe received a series of requests from individuals and companies, working on various projects as he continued with his schoolwork.

In February, Abe held a solo exhibition in Nagoya.

"What Isetan wanted was 'something that cannot be seen elsewhere.' I thought his work could meet the request," said Ryutaro Kanno, an employee of Sakai Co., an Osaka-based writing instrument manufacturer, who sounded out Abe about the Tokyo event.

Abe started drawing with colored pencils in front of people after his posts on Twitter.

It became his habit to draw pictures on a daily basis after he asked for a set of 120 colored pencils as a gift to celebrate him entering high school. Soon, he started posting his work on Twitter.

Abe's themes have included fruit, jewels, cats, dogs and snow leopards. He spends at least an hour a day, sometimes eight, exploring shading variations and experimenting to produce new colors by applying one color over another.

"The charm of colored pencils is that you can draw any time you want," Abe said.

The number of his followers has continued to increase as he improves his drawing skills, currently standing at 63,000. With his profile further boosted after he was featured in a nationally televised program, his surroundings began to change at a pace he had never imagined when he started out.

The tweet, which is attached to a watercolor painting of a cat near water and a colored pencil drawing of another cat, was retweeted more than 40,000 times, making it his representative work.

The artist feels a sense of responsibility that comes with turning what he loves to do into a job because he negotiates with clients himself. He feels pressure more often than before, while he also may receive harsh reviews for his work.

"Their feedback is proof that they are viewing my work. I make a point of taking it in a positive way," Abe said.

After graduating from high school on Feb. 28, he will attend a beauty-related school from April to work toward his childhood dream of becoming a makeup artist.

"I'll be playing for keeps after my novelty as a high school student is taken away," Abe said. "I aim to become an 'all-rounder' who will be recognized for his skills both in makeup and colored pencil art."