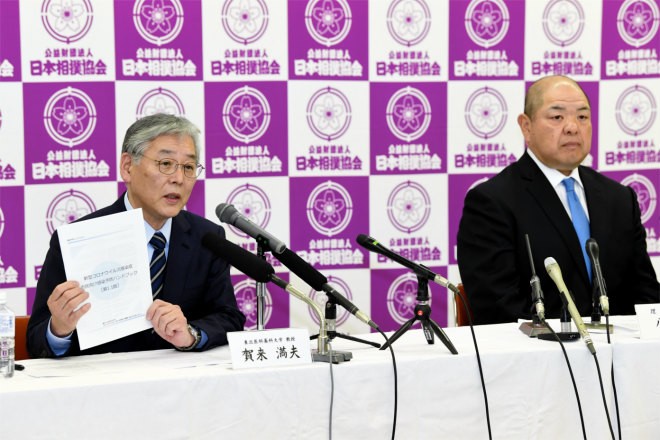 OSAKA--For the first time in 75 years since World War II, a grand sumo tournament will be waged behind closed doors, out of concern for the COVID-19 spread.

The Spring Grand Sumo Tournament will go on as scheduled from March 8 with health safeguards in place, including daily temperature checks of wrestlers, altered rituals and no spectators.

The Japan Sumo Association (JSA) on March 1 gave the go-ahead for the tournament to be held at the Edion Arena Osaka in central Osaka.

It will mark the first time a grand sumo tournament has been held without spectators since the summer tournament in 1945.

Fans can watch the competition on a live telecast by the Japan Broadcasting Corp. (NHK), the JSA said after holding a special board meeting here.

If  a wrestler gets infected with the disease, the tournament will immediately be canceled. The JSA will later announce how advance ticket holders for the 15-day tournament can get a refund.

Wrestlers have expressed confusion toward the “heightened state of alert” issued less than a week before the tournament.

The JSA said it will urge wrestlers in the lower divisions including makushita who are more likely to use public transportation to travel to the arena not to do so to minimize contact with the public.

Since they are not accustomed to using a taxi or a private car, JSA officials are worried if the lower-division wrestlers can arrive on time without being caught up in traffic.

The JSA will change the “chikaramizu,” a ritual in which a wrestler who has won the previous bout offers ceremonial water with a ladle to the next wrestler to drink before his bout.

In the upcoming tournament, wrestlers will not place his mouth on the ladle to prevent the risk of infection.

The JSA will also require all association members including wrestlers to check their body temperatures each day.

If a wrestler has a fever of 37.5 degrees or higher, a standard the health ministry has set, he will not be allowed to compete that day.

The JSA will discuss how to record the results and reflect them in the rankings for the next tournament if an infection is confirmed and the tournament is canceled.

If a background person, such as sumo referee or a ring announcer, is infected with the coronavirus, the JSA will decide what to do, depending on the situation.

After the completion of the tournament, the traditional lengthy award ceremony in the ring will be downsized. The parade for the tournament champion will also not be held.

Some sponsor companies have already canceled the cash prizes they offer to the winning wrestlers for high-profile bouts.

“I understand it will be difficult for wrestlers to raise their spirit,” JSA Chairman Hakkaku, the former yokozuna Hokutoumi, said at a news conference. “But how to do it is really important. I want them to focus on that.”

Sekiwake Asanoyama, whose chance to earn promotion to the ozeki rank is dependent on success in the tournament, expressed mixed feelings, saying, “I cannot imagine a tournament without spectators.

“But it has been decided already. I will just keep my fighting spirit for 15 days,” he said.

Sumo’s unique “intimacy” factor with spectators sitting close to the dohyo ring has been a concern for JSA officials, who for a time appeared at a loss over how to respond to the coronavirus outbreak.

Sumo is a contact sport, and wrestlers remain in close proximity to one another on and off the dohyo.

Close contact among the spectators, many of whom are elderly, would also have been inevitable either in the box seat sections near the ring or the seats in the Osaka arena, which has a capacity of more than 7,000 fans.

“Whether the spring tournament is held or canceled, the JSA would be criticized,” a person involved in the decision said about walking a tightrope between fans and critics.

With the government’s request to cancel or scale down sporting and cultural events, the JSA board was able to reach a compromise.

Opinions and advice from health experts also helped the JSA to reach the decision to hold the tournament behind closed doors.

Mitsuo Kaku, a specially appointed professor at Tohoku Medical and Pharmaceutical University who specializes in control and prevention of infectious diseases, at the news conference urged the JSA and wrestlers to “take their body temperatures and exercise control over their health.”

(Takahiro Takezono contributed to this article.)