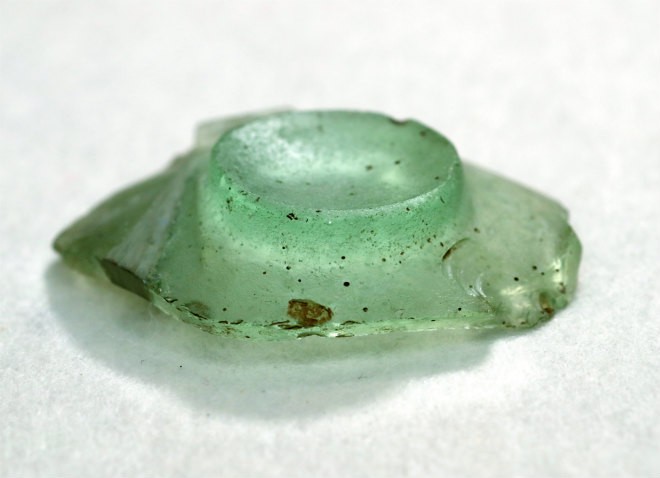 Munakata Taisha shrine teamed up with experts and used X-ray imaging to analyze the artifact as well as small pebble-shaped “kirikodama” ornaments made of glass. They date to the late fifth century to seventh century.

Okinoshima island, located off Munakata, Fukuoka Prefecture, is considered by the shrine to be so sacred that only males can visit and only if they engage in purification rituals before coming ashore. The island has yielded a treasure trove of artifacts from ceremonies held there between the late fourth and ninth centuries that are believed to have been carried out during the time of the ancient Yamato kingdom.

To date, around 80,000 items unearthed are designated as national treasures.

The glass bowl fragment measures about 5.6 centimeters. It has a circular base and the surface of the bowl is scratched.

It bears the characteristics of cut glass produced during the Sassanian Empire that encompassed modern-day Iran and surrounding countries. Iraq has yielded similar examples of the glasswear.

Munakata Taisha shrine worked with a team headed by Izumi Nakai, professor emeritus of Tokyo University of Science who specializes in analytical chemistry, to examine the artifact and pebble-shaped ornaments. As an expert in analyzing ancient glass products, Nakai subjected the materials to fluorescent X-ray analysis so as not to damage them.

The results showed that the ashes of plants were mixed with molten glass, a characteristic of Sassanian Persia glassware.

But the pebbles remain something of a mystery, as no similar examples have been found in Japan or elsewhere. However, it was assumed the ornaments were produced by reprocessing Sassanian Persia glassware.

Makiko Fukushima, curator of Munakata Taisha Shinpokan museum, said: “We were able to gain very precious insight into where the unearthed items were created, the route used to bring them to Japan and the degree of influence of those involved in the ceremonies where such glassware was used.”

(This article was written by Kunihiko Imai and Shinji Ueda.)