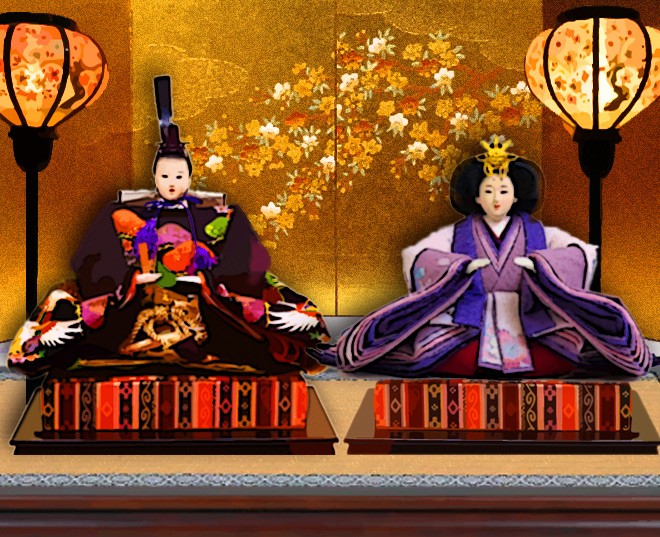 Inside my closed hand--
a petal from the dogwood
a captive prayer
--Priscilla Lignori (Montgomery, New York)

my cat screams
its need to go out--
prison for two
--Margherita Petriccione (Scauri, Italy)

blind date for a cat
an alleyway becomes
a tunnel of love
--Alan Summers (Wiltshire, England)

Here we are--
on a bookshelf too
mini dolls
--Yutaka Kitajima (Joetsu, Niigata)

The Hina Matsuri (Doll festival) celebrated on March 3 never ceases to amaze the haikuist. Dolls of all shapes and sizes fit every nook and cranny where he lives. Tiffany Shaw-Diaz shopped for a new doll friend in Centerville, Ohio. Ezio Infantino celebrated the peach blossom festival in Verona, Italy. Kiyoshi Fukuzawa winked at the first sip of his homemade mix of unripe green plums and rock sugar steeped in shochu.

a remedy
for lack of friends--
American Girl catalogue

Plums blooming
in the corner of my heart
fragrant ume liquor

While Anne-Marie McHarg was walking to her local supermarket in London she “caught a glimpse of a Japanese lady in full kimono dress” and “it was so unusual I looked twice,” she said. Rodica Stefan admired a fashionable gentleman in Bucharest, Romania. On a visit to Kunming, China, Roger Watson was surprised to hear people calling out and pointing toward sakura blossoms. Writing from Pasadena, California, Kath Abela Wilson remarked, “Thinking of blossoms I am overwhelmed with memories of our visits to Japan ... and from my East Coast childhood.”

Fallen pink flowers
on the table …
we spread our picnic

Christof Blumentrath slowly picked petals off an ox-eye daisy while alternately reciting “she loves me, she loves me not.” Sheila Riley admits that she’s “not a cat lover” and is “even a bit afraid of them,” yet she feels she can understand them. Josephine LoRe can’t.

one more daisy
i double-check
if she loves me

oh kitty
if you love me so
why must you bite

rebellious wind--
the flowers of the plum tree
all torn

Ken Sawitri noted that the largest flower ever to be found grows to the east of Lake Maninjau in Sumatra. The talented Indonesian haikuist who now lives in Central Java said she “is writing haiku to celebrate her homecoming.”

undisturbed forest
with rafflesia the guardian
... the crowd!

Kanematsu heard hoots and hollers. Eva Limbach’s bedroom window had been left slightly ajar. Mary Vlooswyk moved to a new home in the suburbs of Calgary, which borders a large natural park in Alberta.

new neighbors
peering over the back fence
bobcats

Haiku is sometimes referred to as one-breath poetry, which is all the time McHarg needed to experience this moment.

In one breath
Flocks of wings
Take to the air

Tsanka Shishkova composes haiku in her daily journal. Rosemarie Schuldes jotted thoughts down quickly in Mattsee, Austria. Paul Faust discovered a restaurant worth writing about in Ashiya, Hyogo Prefecture. Daniella Misso visited overnight with family in Savona, Italy, gleefully noting in her diary, “I sleep in my aunt’s room with plum blossoms wallpaper.”

diary book
with a map of Japan--
Christmas gift

an encounter with
newfound tastes and old-fashioned sites
seaside neighborhood

moonlight dusk--
fragrance of plum blossoms
in the notebook

While locks on the Upper Mississippi river lean-in to control snowmelt, John Zheng watched the full moon pull at the Yazoo river. Andy McLellan pulled at his heartstrings in Canterbury, U.K. Maike Walbeck went beachcombing on the Spree river, which flows through Germany toward the North Sea. Jorge Alberto Giallorenzi went for an early morning stroll down the Rio de la Plata Basin in Buenos Aires, Argentina.

tracing the stitches
on my doctor’s lab coat
cardiac echo

river ravine
the song of a rooster
scented with flowers

Cloudberries
here and there
slow walking

gentle eyes--
a smile behind branches
of the berry bush

Aloof cats left broken-hearted Kanematsu and Vandana Parashar, respectively, to mend by themselves.

Left alone
by my cat in love
crescent moon

thawing snow
my cat leaves me
and my knitting alone

worm moon
on the roof pretty cat
and two tomcats

It’s always a peach of a day at http://www.asahi.com/ajw/special/haiku/. The next regular issue appears on the vernal equinox, March 20, and an Asahi Haikuist Special column appears March 27 to share the results of the Matsuyama Photo Haiku Contest supported by The Asahi Shimbun. Readers are invited to send haiku about baseball on a postcard to David McMurray at the International University of Kagoshima, Sakanoue 8-34-1, Kagoshima, 891-0197, Japan, or e-mail to mcmurray@fka.att.ne.jp.