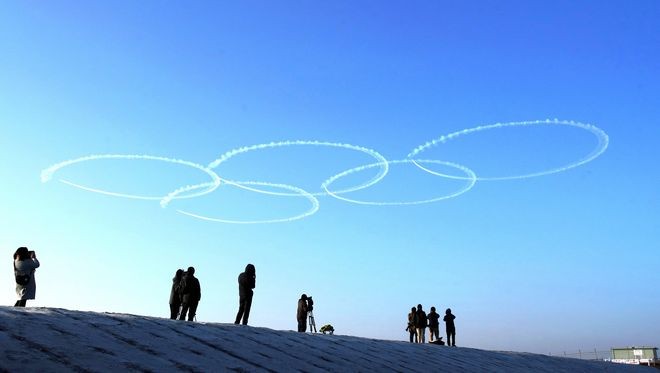 The Blue Impulse team draws Olympic rings above the Air Self-Defense Force's Matsushima base in Higashi-Matsushima, Miyagi Prefecture. during a practice run on Jan. 24. (Shigetaka Kodama)

HIGASHI-MATSUSHIMA, Miyagi Prefecture--Shinji Yamamoto was once a member of the elite Blue Impulse aerobatic team that is the pride of the Air Self-Defense Force.

But he lost his nerve after he saw the devastation wrought by the 2011 earthquake and tsunami disaster, and packed it in to work at the Defense Ministry in Tokyo.

Yamamoto, now 43, remained haunted by images of the survivors' suffering, intermingled with the anguish he felt when he was unable to contact his wife for days afterward.

At the time, Yamamoto wondered if Blue Impulse would ever perform again.

Despite his misgivings, the crack aerobatic team was back in action in no time at all. Its presence was an encouraging symbol of post-disaster recovery efforts.

Now, Yamamoto is once again in high spirits as the Tokyo Olympic Games approach and Blue Impulse pilots practice drawing Olympic rings over the quake-stricken area.

When the magnitude-9.0 Great East Japan Earthquake and tsunami struck, the squadron was not at its home base of Matsushima here but in faraway Fukuoka Prefecture's Ashiya Air Base to perform aerial stunts to mark the opening of a new route along the Kyushu Shinkansen Line.

In hindsight, that was probably fortuitous as the Matsushima Air Base was heavily damaged in the disaster, and many aircraft were swept away.

At the time, Yamamoto was a trainee, having joined the elite Blue Impulse team just five months earlier.

On the day of the disaster, Yamamoto was in the back seat of fighter with a senior pilot at the controls performing exercises over JR Hakata Station in Fukuoka in preparation for the ceremony.

After landing, Yamamoto received a phone call at the Ashiya base from his wife at their apartment in Higashi-Matsushima.

The couple had just married and Yamamoto's wife was pregnant.

"Help me," she shouted down the telephone in panic. "The house is shaking." Yamamoto urged her to remain calm and keep clear of objects that could collapse.

It was only after he put down the phone and switched on the TV that Yamamoto realized the scale of the unfolding disaster as he watched shocking footage of tsunami ravaging the Tohoku region's coastline.

He quickly called back, but could only hear his wife pleading with a neighbor to give her a ride to safety. Then the line went dead. Yamamoto had no way of contacting his wife to find out if she was out of harm's way.

To add to his anxieties, he was ordered to remain at the Ashiya base. It only was five days later that he was able to return to the Matsushima base by transport plane. He then had to take a bus to reach their apartment. When he arrived, he found that the tsunami had run out of steam only dozens of meters from in front of the building.

Yamamoto's wife fell into his arms crying after she opened the door. She had been surviving on stocks of juice and other food items as electricity and gas supplies had been cut off.

Yamamoto could only spare 10 minutes before returning to his base. He made his wife agree to leave the following day for southern Kyushu where her parents reside.

For two months since then, Yamamoto worked tirelessly to remove tsunami debris on streets, made sure neighbors got supplies of drinking water and searched devastated areas for missing individuals.

More than 5,000 buildings were destroyed in Higashi-Matsushima, and the death toll exceeded 1,000. Yamamoto quickly realized that many of those who lined up for water had relatives and friends who were still missing.

Remembering his own frantic experience of not being able to contact his wife for several days, Yamamoto felt his neighbors' suffering was beyond his imagination.

He began wondering if the Blue Impulse team would ever take to the air again.

"Simply thinking of flying seemed so discourteous to the victims," he thought.

As things turned out, the team was airborne again sooner than expected, with members practicing their flight skills at a temporary training site on the Ashiya base in late May.

"I agonized over whether to restart training given that Matsushima has suffered so much damage and so many people were still missing," said the head of the Blue Impulse team at a news conference to announce the decision to return to the air.

The decision was grounded in practicalities. Keeping the aircraft grounded for a prolonged period ran the risk of pilots losing their edge and a lowered ability to respond swiftly to natural disasters and other emergencies.

Although Yamamoto took all this in, he found it difficult to concentrate on training with so much misery all around him.

The Blue Impulse team swung back into action in March 2013 at the urging of local residents who had waged a campaign for the unit to make a comeback as "a symbol of reconstruction."

It was an emotional homecoming for the team members when they returned to the Matsushima base as pilots and locals alike unashamedly shed tears.

"This marks another step toward the town's recovery," a resident told the senior base officer at the time.

By then, Yamamoto had dropped out of the crack flight team even though his three-year term was not up. It was simply that he was no longer up to the task of performing aerial loops and other maneuvers in synchronized formation.

Watching the arrival of the Blue Impulse on TV, he thought back to when he first learned that his wife was safe. He was also haunted by the faces of victims who craved fresh supplies of drinking water after the disaster.

"For sure, some people might have had an issue with the decision to return, but I for one felt happy when I saw the smiling faces of residents," Yamamoto said.

Seven years have passed since the Blue Impulse team made its comeback. The pilots are now hard at work preparing for the arrival of the Olympic torch in Japan on March 20 when they will take to the air to draw Olympic rings in the sky with colored smoke.

The No. 2 officer on the team is Yuki Ento, 40. He and Yamamoto joined up at the same time and have remained close friends.

Even though Yamamoto now works at the Defense Ministry in Tokyo, he has talked to Ento about his aspirations for the Blue Impluse mission and his feelings about the devastation in northeastern Japan that claimed nearly 20,000 lives.

"You must perform successfully," Yamamoto emailed Ento a month before the ceremony. "You must also put top priority on safety."

Ento wasted no time replying. "We are able to fly because we have overcome our difficulties and will draw the rings to represent recovery. Please pray for our success from Tokyo."

RINGS IN THE SKY

The Olympic symbol, five interlocking rings, will be pained in fives hues by the Blue Impulse team when the Olympic flame arrives at Matsushima base by a special transport plane from Greece.

The use of colored smoke was once banned owing to the issue of ground pollution, so the Defense Ministry developed contamination-free dyes for the project.

During the 1964 Tokyo Olympics, a Blue Impulse team drew the Olympic rings over the National Stadium during the Opening Ceremony, wowing spectators.