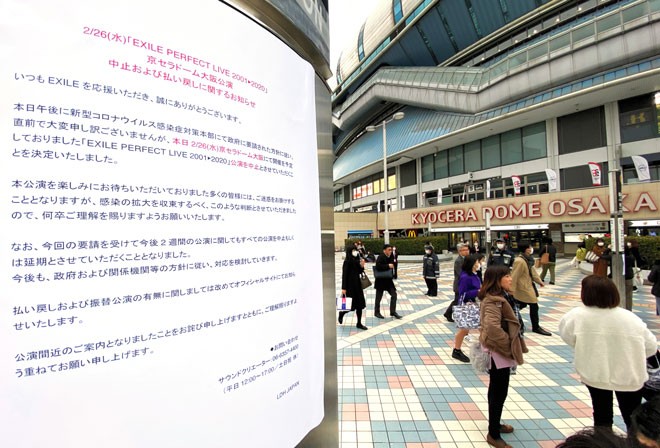 A poster announces the cancellation of an Exile concert at Kyocera Dome Osaka in Osaka on Feb. 26 due to the spread of the coronavirus. (Tatsuo Kanai)

Concert artists and performers are in the spotlight as some continued taking the stage despite voluntary calls for cancellation of such events.

“As a precondition, anti-infection measures should be fully taken, and theater events should be held,” Hideki Noda, a Japanese famed playwright and director, said on his website on March 1.

Noda asked the public to understand the continuing operation of theaters.

“I am seriously worried about a rumor spreading, such as that theater people are selfish artists. They are just trying hard to perform in such a difficult time.”

The rock group Tokyo Incidents, which has five members, including Sheena Ringo, held live concerts on Feb. 29 and March 1 in Tokyo as scheduled.

A theater group in Tokyo has continued to hold performances at its 100-seat theater since late February.

“A grant from Agency for Cultural Affairs is one of our financial resources,” one of the production members said. “If we cancel our events, we cannot receive financial aid.”

He continued, “If we cancel them, we will go bankrupt.”

Other performers, such as rock band Non Stop Rabbit, canceled its concerts.

The Tenman Tenjin Hanjotei theater in Osaka will cancel the “rakugo” comic storytelling daytime performances between March 3 and 15.

Masakazu Onda, the theater manager, said he felt pressured to cancel the shows.

“Some people called to complain that we were still continuing even though others canceled their events,” he said.

In addition, “Yoshimoto Kogyo Co. (which represents about a third of rakugoka comic storytellers from Osaka and Kyoto area) canceled their events,” he said. “That was a big blow to us.”

Major classic music management agency Kajimoto in Tokyo’s Ginza is trying not to cut ties to its audiences.

The agency distributed six hours of programs on the internet on the evening of March 1. In the programs, more than 10 people, mainly artists whose concerts have been canceled or postponed, gave talks and performed.

In the light of the cancellations, there is a movement afoot to ask the Japanese government for compensation for the financial damages.

The Japan Association of Classical Music Presenters, consisting of classic music business operators, will prepare a written statement to the government at an extraordinary executive board meeting on March 4.

“The government should take measures, such as alleviating the corporate tax,” an association official said.