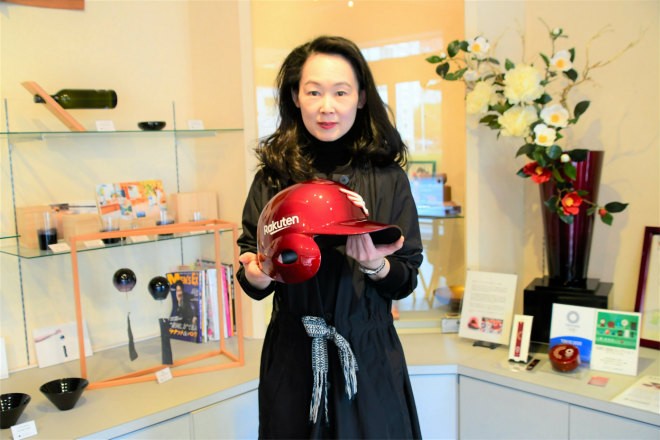 SENDAI--The Tohoku Rakuten Golden Eagles placed a disappointing third in the Pacific League last year, but they will certainly shine brightly in this baseball season, no matter where they finish.

The team’s new batting helmets are brighter and tougher thanks to an “urushi” lacquering technique that has been handed down in the team’s hometown of Sendai in Miyagi Prefecture.

As the word tamamushi, meaning “jewel beetle,” indicates, the glaze pattern of the helmet changes according to the angle of the light.

The shiny, deep red-colored helmet has a smooth surface and is lighter than it looks. The base of each helmet was custom-built to conform to the shape of the player’s head.

Tamamushinuri is believed to have been developed for export purposes under a state policy in the 1930s at a national craftwork training center in Sendai.

Crafts created with the technique have become popular overseas and are gaining recognition as leading artworks of Miyagi Prefecture because the silver powder rubbed between the Japanese lacquer layers generates a unique luminance.

Tohoku Kogei has taken over the role of carrying on the traditional technique.

The Rakuten baseball club contacted the company and talked about the team’s desire to adopt local traditions.

Their conversation led to a decision last summer to produce the lacquer-covered helmets.

The idea worked well partly because the classic red used in Tamamushinuri is similar to Rakuten’s team color.

But urushi lacquering tends to be fragile, and the craftsmen were unsure if the technique could be used for a helmet that could be hit by a 160-kph fastball.

Tohoku Kogei decided to deploy a new technique designed to create dishwasher-proof lacquerware to protect batters at the plate.

This technique was jointly developed by the company and the National Institute of Advanced Industrial Science and Technology’s Tohoku Center in Sendai’s Miyagino Ward.

Resin mixed with special transparent clay is sprayed in the last minute of the process to increase the durability of the lacquer.

The lacquer is scratch resistant even with a 2H pencil. The lacquer also did not fade in color after being exposed to sunshine for five months.

Takeo Ebina, a 55-year-old researcher at the Tohoku Center, said Tamamushinuri has “grown out of ornamental craftwork and become a vibrant craftwork with a sports movement.”

Ebina hopes the helmet draws many people’s attention to Tamamushinuri.

After trial and error, the artisans started full-fledged coating in November and delivered about 250 helmets in January.

Midori Saura, a 50-year-old executive of Tohoku Kogei, said the helmets “contain the thoughts and feeling of many people.”

“I hope Tamamushinuri can be of assistance to the Rakuten team, whose players are working hard to make history in the Tohoku region,” Saura said.