Ministry buying up face masks to deliver to homes in Hokkaido 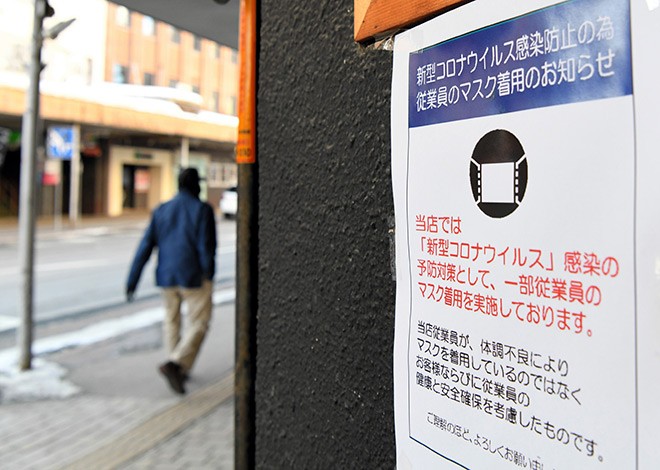 A poster announcing that employees wear face masks is shown at an “izakaya” Japanese pub in Kitami, Hokkaido, on Feb. 29. (Takuya Isayama)

The government on March 3 used a 1973 law for the first time to order manufacturers and importers to sell their face masks to the health ministry for distribution to coronavirus-hit Hokkaido.

The order is based on Article 22 of the law on emergency measures for stabilizing living conditions of the public. The Consumer Affairs Agency said it is the first time the law has been invoked since its enactment nearly half a century ago.

The health ministry will first distribute the face masks to Naka-Furano, a town with a high percentage of infections, and the city of Kitami, which is considered a potential hotspot for the spread of the novel coronavirus.

Through industry groups, 4 million face masks will be prepared, allowing households in the two municipalities to receive 40 masks each.

Employees of the Japan Post Group will deliver the masks to each household starting on March 6.

The government decided at a March 3 Cabinet meeting to use 2.285 billion yen ($21.3 million) from a reserve fund of this fiscal year’s budget to cover the distribution costs.

According to the Hokkaido government, 79 people have been confirmed infected on the northern main island. Three patients have died while 12 recovered and have been released from hospitals.

The Sapporo city government on March 3 announced two newly confirmed cases—a woman in her 30s and a woman in her 60s who are both office workers in the Hokkaido capital.

Their conditions are not serious.

The two women came in close contact with another office worker in her 20s in Sapporo who tested positive on Feb. 29, the city government said.