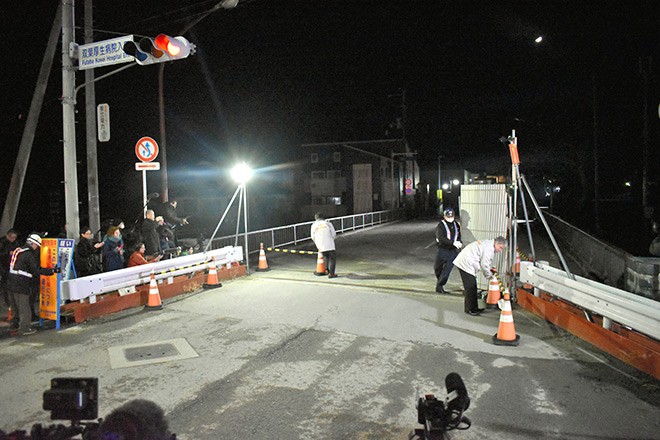 Workers open a barrier on a road that leads to JR Futaba Station after an evacuation order for Futaba, Fukushima Prefecture, was partially lifted at midnight on March 3. (Toru Furusho)

The government partially lifted an evacuation order for Futaba, one of two towns whose jurisdiction covers the crippled Fukushima No. 1 nuclear power plant in Fukushima Prefecture. It marked the first time for restrictions to be lifted for a designated "difficult-to-return zone."

The measure, which took effect at midnight on March 3, will allow an Olympic torch relay planned for the region on March 26.

Futaba is the only municipality whose entire area had remained off-limits due to high radiation levels caused by the triple meltdown triggered by the earthquake and tsunami disaster of March 11, 2011.

The area, which is inside the difficult-to-return zone, has priority for reconstruction and is required to carry out decontamination work to make it habitable.

Evacuation orders for all the other parts of the priority area are expected to be lifted as early as spring 2022 to allow residents to return there.

Evacuation orders for the Hamano and Morotake districts, which span 2.2 square kilometers, were lifted as well. Both districts had been designated as “zones in preparation for lifting the evacuation order,” where radiation levels are relatively low.

The government will also lift evacuation orders for Ono Station in adjoining Okuma and its surrounding areas on March 5 and Yonomori Station in Tomioka in the prefecture on March 10. The areas are currently designated as difficult-to-return zones.

On March 26, the Olympic torch relay will start at the J-Village sporting complex, which is located near Tomioka town.