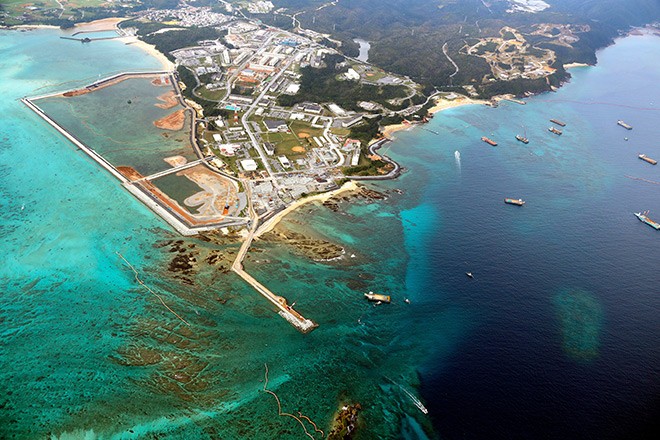 NAHA--Geologists warned that reclamation work for a new U.S. military base in Okinawa Prefecture could be at serious risk unless a full-fledged drilling survey is carried out of the porous seabed.

Specifically, the experts said that an embankment might collapse under its own weight.

Masaaki Tateishi, professor emeritus of geology at Niigata University, submitted a report to the prefectural government on March 3 questioning the soundness of the project to relocate the U.S. Marine Corp Air Station Futenma in Ginowan in the prefecture.

“This could all lead to a dead end,” said Tateishi as he raised the red flag against the central government’s relentless determination to continue building the facility off the Henoko district of Nago.

Tateishi led a group of 10 geologists and specialists who analyzed the strength of the seabed at the construction site based on data submitted to the Diet.

The site is adjacent to the U.S. Marine Corps Camp Schwab.

Despite initial government denials, it emerged that some portions of the seabed in the construction area have the “consistency of mayonnaise” and will require a monumental effort to reinforce.

The experts examined the seabed stability of a portion named B27 in Oura Bay and northeast of Camp Schwab.

Data submitted to the Diet in March last year suggested the seabed 70 meters below the ocean surface in B27 was too soft to build on.

The data came from core samples taken from the seabed in a survey by a research company commissioned by the Defense Ministry. The samples showed that the seabed's strength in B27 was the second softest on a scale of six.

Takeshi Iwaya, who was defense minister at the time, told the Diet the ministry had never surveyed the B27 area.

But after the data came to light, the ministry insisted that no ground reinforcement work would be required at a depth of 70 meters or deeper because the seabed is made up of “an extremely hard layer of clay.”

Japan has the technology to work on the seabed at a depth of 70 meters, but no deeper. The porous seabed is said to extend for dozens of meters in places.

The ministry continues to maintain that the survey is not credible on grounds it was not an official study to assess the strength of the seabed based on a method developed by the Japanese Geotechnical Society, a specialist group.

The ministry continues to deny the need for a thorough study of B27.

But Tateishi and his colleagues insist that the survey indicates that the seabed 70 meters below the surface is extremely weak and unstable.

Under the ministry’s plan, one of embankments will be constructed in the B27 spot to reclaim land from the sea.

The B27 area is located near the edge of a deep valley on the sea floor.

A massive structure such as an embankment could slip into the abyss under its own weight, the geologists said.

“We cannot help pointing out that the ministry has used data in a way that fits its purpose and makes it look as if the seabed is sturdy enough,” Tateishi said.

He called on the ministry to conduct a detailed survey of the area.

“It is only right that the ministry should conduct a drilling survey of the spot to retrieve core specimens if it wants to design a safe facility,” he said. “I don’t understand why the ministry does not bother to do so, given that the process is not difficult.”

The government first learned of the weak stretch of seabed in a 2014-16 survey. But it only acknowledged the fact after reclamation work started in late 2018.

Late last year, the government revised its estimate of the overall cost of the construction of the new U.S. base at about 930 billion yen ($8.66 billion), about 2.7 times the initial figure, including work to solidify the soft sea floor.