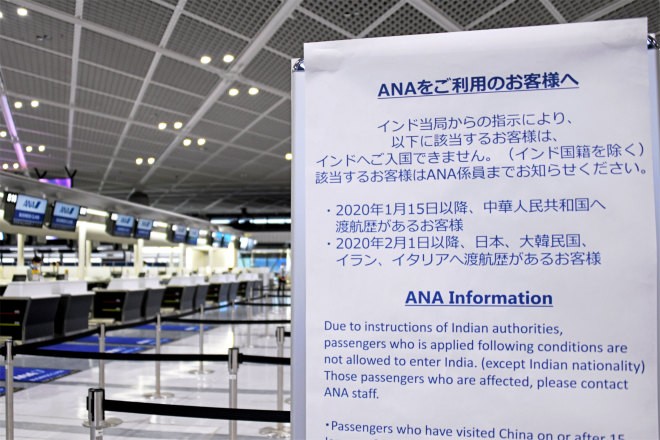 A notice about India’s latest visa restrictions is displayed near check-in counters at Narita International Airport in Chiba Prefecture on March 4. (Atsuo Negishi)

India invalidated all entry visas issued on or before March 3 to Japanese nationals in an effort to curtail of the spread of the new coronavirus. The measure also applies to people from South Korea, Iran and Italy.

Those who had already entered India by March 3 were not affected by the measure, but their visas will be rendered void once they leave.

There are about 9,000 Japanese living in India. Their visas will become invalid if they visit Japan temporarily or go abroad on business.

Those who need to leave India and return later will be required to apply for a new visa at the Indian embassy in the country where they are staying.

The Embassy of India in Tokyo essentially suspended its visa service as of March 4.

The new measure expanded the restrictions to include Japanese nationals living in India for business or study reasons.

As of March 4, India clamped down on exports of fever-reducing and pain relief medicines to avoid a drug shortage.

All passengers entering India will have their temperature checked on arrival.

Twenty-eight cases of coronavirus infection, including foreign tourists, have been confirmed in India.

Prime Minister Narendra Modi in the meantime called on the public not to panic and canceled his scheduled attendance at an ancient Hindu “Holi” festival on March 10.

Only about a dozen passengers, mostly Indian nationals going home, boarded a Japan Airlines’ flight to Delhi on March 4.

All Nippon Airways operated three flights to Delhi, Chennai and Mumbai that day, but carried less than 100 passengers combined.

When the Indian government announced the new visa restrictions on March 3, flights operated by both JAL and ANA had already departed Narita.

Those passengers were allowed to enter India, the airlines said. But almost all Japanese nationals who were scheduled to be on March 4 flights to India canceled their reservations.

Neeraj Sharma, 47, who operates a business in India finding jobs in Japan for technical interns and people with IT skills was one of the few passengers.

He was supposed to stay in Japan until March 7, but decided to cut his trip short because meetings and seminars got canceled.

“Young people in India who want to go to Japan are very worried if it’s safe to do so now," the man said. "If this situation continues, a lot of damage will be inflicted on relations between Japan and India.”