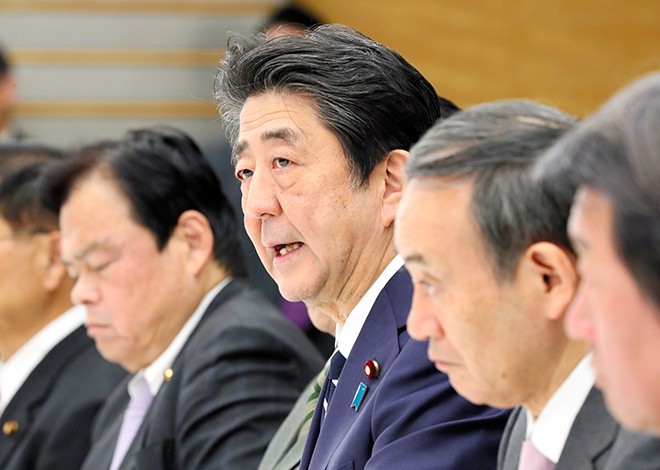 Abe announced the anti-coronavirus measures on March 5, the same day both Tokyo and Beijing confirmed a postponement in a state visit by Chinese President Xi Jinping initially planned for early April.

Under the stricter restrictions, those arriving from China and South Korea will be quarantined for up to two weeks. Tokyo has also asked its two neighbors to instruct citizens to refrain from visiting Japan and invalidated visas issued to their nationals.

“We cannot help but think that the response was delayed because of the planned visit to Japan by President Xi Jinping,” Akira Koike, an executive of the opposition Japanese Communist Party, said.

Koike noted that the new coronavirus has been confirmed in people within Japan who have never been abroad. He said the government’s latest restrictions would likely not help to prevent a further spread of infections in the country.

Jun Azumi, chairman of the Constitutional Democratic Party of Japan’s Diet Affairs Committee, called for an assessment on whether the government’s measures to keep out foreign visitors were delayed because of consideration given to China.

Renho, a CDP Upper House member, noted that the United States in early February banned entry to all visitors from China. She called for a review of the government’s strategy to gradually increase the areas from which visitors would be prohibited from entering.

The Abe administration on Jan. 31 banned entry for all foreign nationals who had spent the past two weeks in the Chinese city of Wuhan, the epicenter of the coronavirus outbreak, as well as the surrounding province of Hubei. Zhejiang province was later added as was Daegu in South Korea from Feb. 26.

Yoshiaki Katsuda, a professor at the Kansai University of Social Welfare who specializes in the relationship between health and travel, cast doubt on the government’s latest measure, citing a decrease in new confirmed infections in China.

“Although infections are still increasing in South Korea, for China, I cannot help but ask ‘Why do it now?’” Katsuda said.

He also questioned whether sufficient personnel and facilities can be secured to quarantine all visitors who arrive from the two nations.

A veteran lawmaker with Abe’s Liberal Democratic Party said the government had to make the move in part to prevent further contamination in Japan from causing ripple effects overseas.

“If an entry restriction was not placed on China, the United States might have placed a restriction on visitors from Japan,” the lawmaker said.

But other LDP lawmakers were more worried about the economic effects of the latest measure.

“The damage to small businesses that have transactions with China will be enormous,” a former Cabinet minister said.

Another LDP lawmaker said there was fear that a major drop in visitors from the two nations could continue even after the quarantine rules are lifted.

A Diet member from junior coalition partner Komeito also pointed to the possibility of Beijing and Seoul retaliating with their own entry restrictions on Japanese.

“That would lead to a further stagnation of the economy, and gross domestic product for the first quarter could decrease by more than 10 percent,” the lawmaker said.

Travel between Japan and China had already fallen after Beijing ordered a ban on group tours.

According to Japan’s transport ministry, the number of regular flights from China, excluding Hong Kong and Macao, had decreased by 85 percent as of Feb. 28 from the planned number of flights set in mid-January.

The Daiwa Institute of Research calculated that if no visitors arrived from China and South Korea between March 9 and 31, Japan would lose about 173.5 billion yen ($1.6 billion) in consumer spending.

The decrease in visitors has already hurt the five major department store chains. Four of them reported year-on-year sales decreases of more than 10 percent in February.