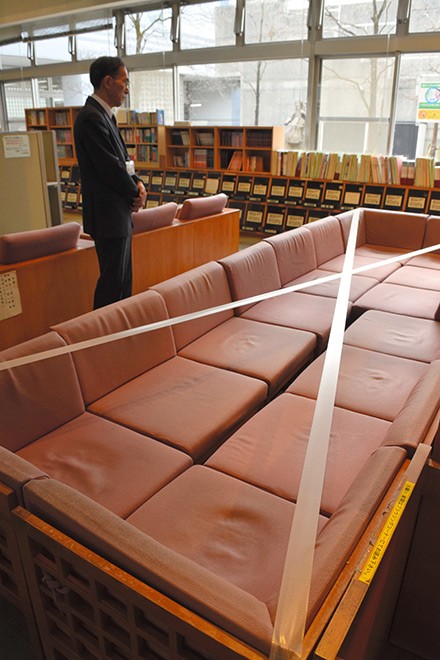 Although her school had been closed amid the coronavirus outbreak and students asked to stay home, a high school girl stood out in her school uniform in Tokyo's Shibuya district on March 3.

The 16-year-old girl’s choice of outfit to hang out with two of her classmates was intentional.

“We’re fine and full of life,” she said at Shibuya 109, a fashionista’s heaven. “Staying at home alone for all that feels so lonely, doesn’t it?

“I thought taking instagrammable pictures in Shibuya would be fun when only a few people are here,” she said.

Feeling lonely and bored at home, schoolchildren, especially teenagers, have been roaming around shopping malls, game arcades and other hangouts since the government-led school shutdown due to the COVID-19 outbreak.

The education ministry at the end of February requested that school boards nationwide close schools starting from March 2 until spring break. The decision affects 13 million students.

The ministry also asked students to avoid going to places that attract large numbers of people, refrain from club activities and basically remain at home.

In line with the order, some businesses and facilities have taken countermeasures to ban students from entering in hopes of preventing the virus spread.

However, that has not stopped many young people from being seen hanging out with friends instead of being at home.

Inside a shopping mall in Tokyo, many junior high and high school students enjoyed shopping and chilling out on a bench with friends here and there on the afternoon of March 4.

A first-year high school student in the capital’s Adachi Ward went to the mall with two of her friends.

“We were told not to go out, but we haven’t been following the order,” the 16-year-old said.

In addition, she has worked for about four hours every day at a supermarket where she runs a cash register, at the request of the store manager.

A second-year male student at a private high school in Tokyo went to see a movie with friends on the morning of March 3.

“I would have been gone to Disneyland or Odaiba, but nothing is open,” the 17-year-old lamented.

In a riverside area of the Tamagawa river, a second-year high school male student was holding a voluntary practice session with fellow athletic club members.

“We have a tournament coming up,” the student said. “We can’t win without having consecutive practices.”

At the Setagaya Ward’s Kibogaoka youth exchange center, known as UPS, junior high and high school students have continued to gather each day until sunset.

The center, opened in February 2019, offers free public space for schoolchildren with a multi-purpose hall, studio and other facilities. It opens at 9 a.m.

A 14-year-old junior high student who came to the center said: “There are only so many places that I can hang out with my friends. Even places like McDonald’s or a cafe, we can’t stay that long.”

The center’s staff said, “Junior high and high school students have nowhere to go. We will continue to remain open unless the ward government says otherwise.”

CAUGHT BETWEEN ‘STAY HOME’ AND ‘GET OUT’

Unlike the center, many entertainment and leisure businesses have begun imposing restrictions on students’ use of their facilities.

“From March 2 to 13, we ask children of high school age or younger not to enter the store based on the government’s guideline,” says a notice posted on Karaoke All Sakurashinmachi in Setagaya Ward.

“We are doing this to end the (coronavirus outbreak) as quickly as possible,” a staff member said.

“It will affect sales and it will be tough, though,” the staff member lamented.

A similar poster has been displayed at a Sega-affiliated game center in Tokyo, where alcohol disinfectant is offered at the entrance and staff wears face masks.

Sega Entertainment Co., which operates about 200 game centers nationwide, has decided to restrict entrance of elementary, junior high and high school students on weekdays from opening hours until 3 p.m. during the period from March 2 to 13.

A 14-year-old male junior high student came to one of the game centers on the afternoon of March 4, only to be told by the staff, to “get out.”

“My parents told me to study, but I can’t study all day even if I stay home all day,” he said.

“I thought (going to the game center) would be relaxing,” he said in disappointment.

Leisure facilities have begun imposing their own restrictions.

Round One Corp. has limited the entry of elementary, junior high and high school students to the company’s chain sports and entertainment facilities. They are not allowed to use the facility by themselves on weekdays from opening hours to 3 p.m. from March 2 to 13.

A third-year junior high school student came in a group of six, all classmates, to Round One in Musashino in western Tokyo on the afternoon of March 4. However, they were turned away.

“We can’t even have a place to play,” the 15-year-old boy said with a bitter laugh.

The boys are graduating this month and will be going to different high schools from April. They were supposed to spend their final weeks together at the junior high with a full schedule of school events, including their graduation ceremony on March 19.

“It’s so frustrating, and I feel lonely,” one said.

“I cannot believe this is it, the end,” another said. “We just wanted to make some memories for the last time.”

Bandai Namco Amusement Inc. has decided to temporarily close game centers housed in shopping malls nationwide and other facilities from March 4 to 15.

A representative said the company has taken into consideration the fact that many elderly customers come to a game center with their grandchildren.

“COVID-19 affects all age groups,” the representative said. “The company has made the decision for the safety and security of everybody.”

NO PLACE FOR A BOOKWORM, TOO?

The wave of restrictions for schoolchildren’s use has spread even among public libraries.

Four public libraries in Kuki, Saitama Prefecture, have banned children and students from using the facilities from March 3 to 31.

Kazuhiro Kobayashi, director of the city’s Central Public Library, said, “We allow them to stay for a short time to check out books if they come with a parent, for example.”

The city government of Iruma in the prefecture has banned school children from using public libraries starting from March 4.