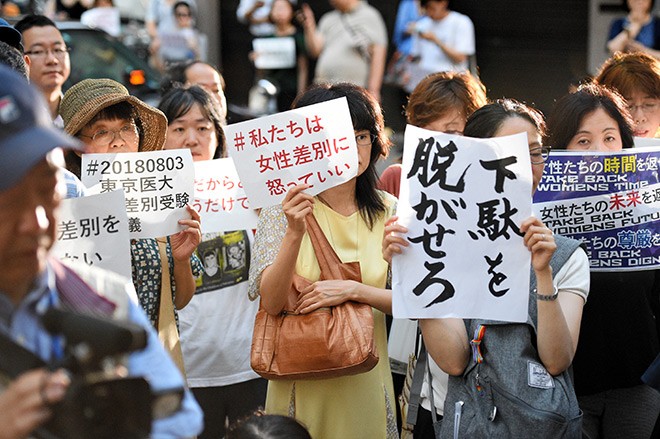 The ruling was the first handed down in favor of a lawsuit brought by a consumers’ organization on behalf of individual consumers who have been wronged.

A special law enacted in 2016 allowed such organizations to file lawsuits on behalf of victims in cases in which a large number of consumers may have been affected.

The Consumers Organization of Japan (COJ) filed the lawsuit against Tokyo Medical University on behalf of female and other applicants who were disadvantaged because the university rigged entrance exam scores to favor males and those taking the exam for the first time.

While the Tokyo District Court ruled that the university was obligated to repay the entrance exam fees, it said the university was not required to cover the transportation and accommodation costs incurred by the applicants when they took the exam.

In his ruling, Presiding Judge Tatsuro Maezawa said, “Secretly adjusting exam scores would have to be evaluated as being illegal.”

If the ruling is finalized, the COJ would call on individuals who might qualify for a new court case to determine the specific amounts each plaintiff would receive.

Tokyo Medical University rigged the entrance exam scores in the 2017 and 2018 school years to put women and those who took and failed the exam in the past at a disadvantage.

The COJ determined that the 2016 special law applied to test takers who were dropped in those years and submitted the lawsuit in December 2018.

In the lawsuit, the plaintiff pointed out that the university should have notified exam takers beforehand that scores would be adjusted. It also argued that the university’s practice was discrimination, which also violated constitutional guarantees of equality before the law and the right to an education.

Tokyo Medical University argued that the 2016 law should not apply because there were only a few individuals who were affected. It also tried to legitimize its score-rigging practice by saying it had been allowed for various reasons in the past.