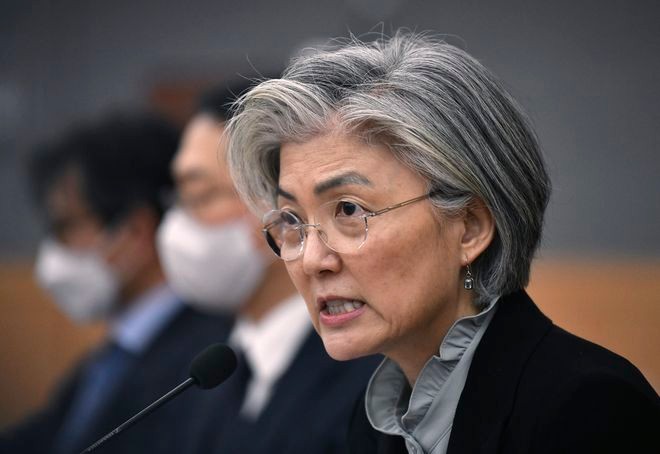 South Korean Foreign Minister Kang Kyung-wha speaks during a briefing for foreign diplomats on the situation of the COVID-19 outbreak in Korea, at the foreign ministry in Seoul on March 6. (Pool photo via AP)

SEOUL--South Korea said on Friday it would suspend visas and visa waivers for Japan in response to Tokyo's own travel restrictions on Koreans, as fears over the spreading coronavirus rekindled a feud between the neighbors dating back to before World War II.

He said Japan’s move was based on a misunderstanding of South Korea’s active efforts to fight the virus, which he insisted were in contrast to Japan’s “non-transparent and passive quarantine activity" reflected by its much smaller number of virus tests.

“Our government once again expresses our deep regrets over Japan's measures that it unilaterally announced without prior consultation or notification," Cho told reporters. He did not take any questions.

At present, Japanese can visit South Korea for 90 days without a visa.

Tomita replied that Japan is facing a “critical period” that will determine whether it can successfully stem the spread of the virus.

Japan is among almost 100 countries to impose curbs on travelers from South Korea, which has suffered 44 deaths and 6,593 infections in the biggest outbreak outside China, where the virus emerged late last year.

The number of cases in Japan grew to 1,112 on Friday, with 55 new infections reported from Yamaguchi Prefecture in the southwest to Hokkaido in the north, according to the public broadcaster NHK.

Thirteen of the new cases were people who visited a live music venue in Osaka or their family members, NHK said.

Japan has barred visitors altogether from highly affected areas in South Korea and ordered two weeks' quarantine for others.

"If the Japanese government does not withdraw its decision ... we cannot help but devise necessary countermeasures, including reciprocal measures," Kang told Tomita.

Japanese health minister Katsunobu Kato told reporters in Tokyo that the instructions, which also apply to visitors from China, would take the form of a request for them to stay in their hotels.

After a meeting at the presidential Blue House earlier in the day, South Korea's National Security Council said Tokyo faced "mistrust from the international community due to its opaque, passive" response to the virus outbreak.

The spread of the disease has raised doubts about whether Tokyo will be able to host the Olympics this summer, but the government has insisted the Games will go ahead as scheduled.

The number of new cases of the virus fell to 505 in South Korea on Friday, from 760 the previous day, the Korea Centers for Disease Control and Prevention (KCDC) said.

Vice Health Minister Kim Gang-lip said authorities had almost finished tests on more than 200,000 followers of a church in southeastern Daegu at the center of the outbreak.

Strains between Japan and South Korea date from the former's occupation of the Korean Peninsula from 1910 to 1945.

Last year, Tokyo slapped trade curbs on South Korea, which responded with a boycott on Japanese goods and services.