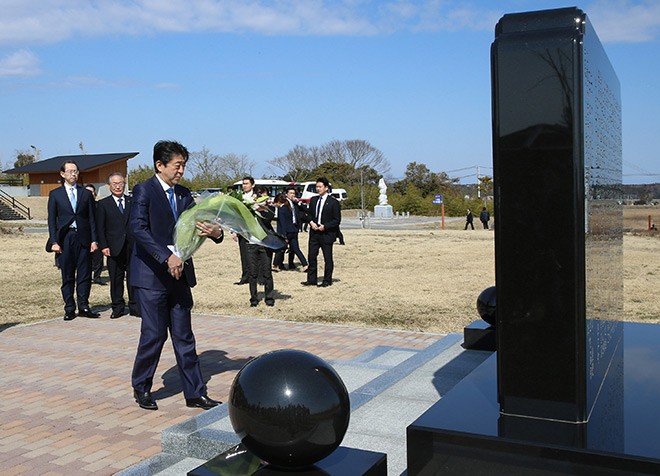 Prime Minister Shinzo Abe presents flowers on March 7 at a monument in a cemetery operated by the Namie town government. (Pool)

FUTABA, Fukushima Prefecture--Prime Minister Shinzo Abe on March 7 visited the virtual ghost town of Futaba, a once bustling community until the 2011 nuclear disaster hit and forced all the residents to evacuate.

His visit came four days before the ninth anniversary of the earthquake and tsunami disaster that triggered the crisis at the Fukushima No. 1 nuclear power plant, and just a few days after an evacuation order was lifted for a small portion of the town.

Futaba is one of two towns whose jurisdictions cover the crippled facility.

Speaking with reporters, Abe was upbeat about the prospects of Futaba eventually recovering its former self, saying, “The lifting of the evacuation order for part of Futaba is a major step forward toward full-scale reconstruction.”

He pledged that the government would continue with efforts to allow evacuees to return to the Hamadori district of Fukushima Prefecture facing the Pacific Ocean and which covers Futaba.

It was Abe’s 20th visit to Fukushima Prefecture and his first since April 2019.

He visited Futaba Station on the JR Joban Line, which will resume full service on March 14. An evacuation order for the area around the station was lifted March 4 to allow trains to run through it.

While much of Futaba is still classified as a “difficult-to-return zone” because of high radiation levels, the area around the station has been designated as a core component of special reconstruction work to allow residents to return.

Plans are afoot to lift the evacuation order for the entire special reconstruction work zone by spring 2022 so residents can begin returning.

Abe took a test run on the Joban Line and met with Futaba Mayor Shiro Izawa at the station platform, where Izawa explained what his town is doing to rebuild.

Abe told Izawa, “I hope many people will use the Joban Line to visit Futaba.”

Abe also attended a ceremony to mark the opening of the Joban-Futaba interchange along the Joban Expressway. He also attended an opening ceremony in Namie for an experimental facility designed to create hydrogen through solar power generation.

Abe stayed at the Tomioka Hotel on March 6 and chatted with the hotel owner and other local officials about the situation in the area all these years later.