SUMO/ Osaka tourney opens with no fans as anti-virus safeguard 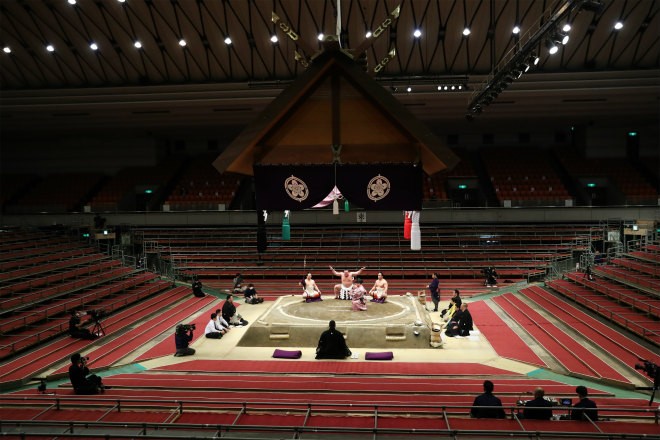 Yokozuna Hakuho performs a ceremonial ritual in the ring at Edion Arena Osaka during the Spring Grand Sumo Tournament on March 8. (Yuki Shibata)

OSAKA--In an eerily quiet setting, a subdued Spring Grand Sumo Tournament opened here on March 8 without spectators due to the outbreak of the novel coronavirus in Japan.

The nationally televised competition at Edion Arena Osaka is the first to be held behind closed doors since the summer tournament in 1945 near the end of World War II.

On March 7, the Japan Sumo Association conducted a Shinto rite to pray for the safety of the competitors.

The JSA will immediately halt the 15-day competition if an infection is confirmed among any wrestler.

It also set guidelines mandating that any wrestler must pull out if they run a fever of 37.5 degrees or higher for two consecutive days, which is stricter than the standard set by the health ministry.