Kiichi Yoneda runs an "okonomiyaki" Japanese pancake restaurant, but he is also touted as a guitar genius on the internet. (Yusuke Morishita and Satoru Ogawa) 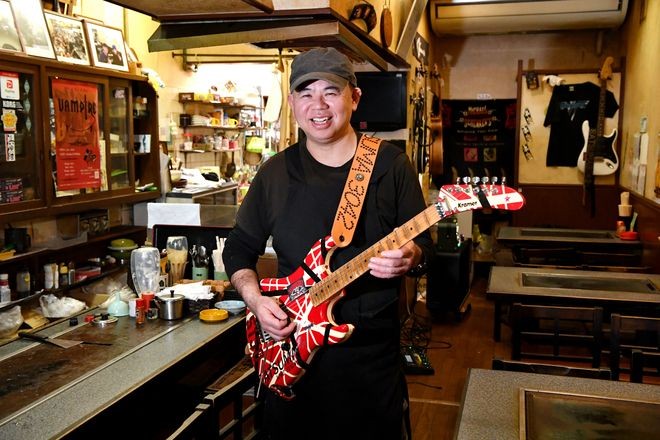 Kiichi Yoneda poses with his electric guitar in Satsuma, his "okonomiyaki" Japanese pancake restaurant in the Kayashima-Higashi district of Neyagawa, Osaka Prefecture, on Feb. 12. (Satoru Ogawa)

NEYAGAWA, Osaka Prefecture--Notice to Rock and Roll Hall of Famer Eddie Van Halen: You've got a serious rival in the guitar shredding department. His name is Kiichi Yoneda, and he serves Japanese-style pancakes for a living.

When he was younger, Yoneda, 53, was in a band and yearned for success as a rock guitarist, but commercial success eluded the group.

Eventually, he packed it in when his father fell sick to operate Satsuma, a restaurant which stands on a corner of a busy shopping street stretching from Kayashima Station on the Keihan Main Line and serves "okonomiyaki."

But once a month, he transforms the eatery into a "live" house packed with guitar lovers.

Yoneda's virtuoso technique won him local repute as "Neyagawa's Van Halen," and a worldwide following after he posted videos online of his transcendental performances. One of his performances ratcheted up more than 2 million hits on YouTube.

These days, Yoneda doesn't look anything like a rock god as he lopped off his waist-long hair years ago.

After he posted videos on YouTube of him playing rock songs from the 1970s and 1980s, he gained fame as a musician of god-like status.

Some viewers rated his versions of Van Halen songs as even better than Van Halen himself. Guitar maniacs started flocking to the restaurant.

Daisuke Totake, 43, a company worker from Yokohama, was so impressed by Yoneda's guitar skills that he made it a point on a business trip to visit Osaka and see for himself what Yoneda was like in a live setting.

"I was shaken by Yoneda's videos," Totake said. "It got me talking with my band mates from high school to start playing again."

Yoneda was first exposed to rock music when he was a second-year student in junior high school. He recalls being frozen on the spot when a classmate's brother, a senior high school student, was listening to Deep Purple's "Highway Star" at full blast.

Enthralled by the driving rhythm of the bass and the thunderous thrash of guitars, Yoneda borrowed a bunch of Deep Purple and Eagles' albums and returned home without even seeing his friend.

He was given an electric guitar for his birthday when he was a third-year student in junior high school and practiced religiously every day. Yoneda was asked to join a band by a university student who had heard him play.

Yoneda had dreamed of going professional in a band after graduating from senior high school, but didn't find success. He abandoned that goal at the age of 25, got his waist-long hair cut and sold his guitars to friends.

Several years later, he was invited by his former band mates to join their band as a keyboardist.

The band released four singles for a major record label but failed to hit the charts, so the members disbanded. Yoneda took over Satsuma as his father had fallen ill.

A turning point came when Yoneda was around 40 years old. A friend from junior high school saw Yoneda cooking okonomiyaki and said: "I'd assumed you had become a pro by now. What a waste."

The friend came to the eatery on a daily basis and gushed to Yoneda that he should resume playing the guitar as he was the bee's knees when it came to making his instrument "sing." Yoneda finally caved in, and bought a cheap guitar for 20,000 yen ($190) and a small amplifier.

Although he hadn't played for a dozen or so years, he found he had not lost his technique nor his love of the instrument. He was surprised to discover that he felt just as "connected" with his guitar as he did back in the old days.

After Yoneda left the band, he was asked by an acquaintance to teach traditional Japanese "taiko" drumming at a local elementary school and elsewhere. For the first time, he studied how to read a musical score so he could provide accurate guidance to the children, an experience that was to prove useful.

When he was younger, Yoneda used to play the guitar as he pleased. But he often found himself playing just like a CD version as he followed the score. Some guitar shredding songs were too fast and confusing to imitate, but he was able to pick up the sounds note for note when he played videos in slow motion.

At this point, Yoneda gave a shot at playing "Eruption," a guitar instrumental by U.S. rock band Van Halen. The song is synonymous with the virtuoso skills of the band's guitarist, Eddie Van Halen, who had a defining musical influence on Yoneda when he was younger.

The song features a technique called "tapping" where a string is fretted and set into vibration. The piece had been too difficult for Yoneda to master.

After he posted a video of himself playing the song on YouTube just for fun in May 2009, it generated a massive responses from listeners around the world. One user said it was like listening to the CD, while another said Yoneda's "sound" was even better than the maestro himself, Van Halen.

Yoneda went on to post videos of him playing covers of other guitar heroes on the video-sharing website. A clip for Van Halen's "Panama" has been played more than two million times, opening doors for him to perform with professional musicians and be invited to events at musical instrument stores across the country.

His efforts brought an unexpected effect on his main occupation, serving pancakes. Fans from the United States, Britain, the Netherlands and Argentina have descended on Satsuma after they watched his videos, while rock enthusiasts from across Japan crash his monthly Guitar Salon party.

Ever modest, Yoneda said: "I guess everyone thinks they can do it too because I'm just a middle-aged amateur player, not a sophisticated type. I'm most happy when I see people who have never met before click with each other and open up to one another in my restaurant, like they have been friends since junior and senior high schools. I want to keep operating such a place and continue playing the guitar, which is my best favorite thing to do."