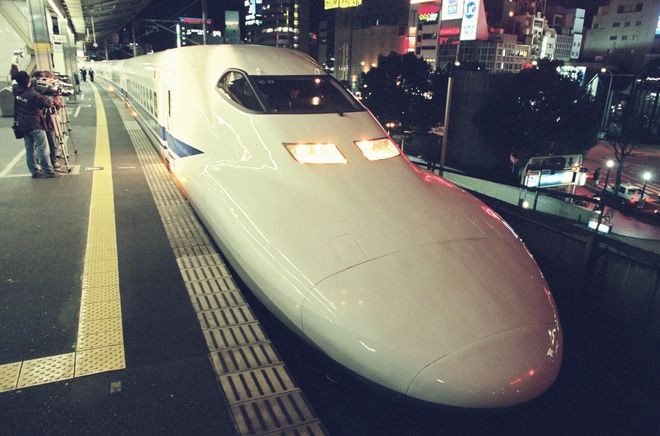 This spring, the new coronavirus is forcing all kinds of events to be canceled, including various ceremonies to celebrate important milestones in the lives of people in every field and social standing. One casualty is a retiring generation of Shinkansen.

The planned final run of the 700-series Shinkansen on the Tokaido Shinkansen Line section between Tokyo and Shin-Osaka scheduled for March 8 has been scrapped.

Nicknamed "kamonohashi" (platypus) for its unique, duck-billed front profile, which looks like the elongated snout of the egg-laying aquatic monotreme mammal, this type of Shinkansen made its debut in spring 1999.

Appreciated for quietness in the car, reduced noise and trouble-free reliability,  the 700-series became the workhorse of the Tokaido Shinkansen Line.

“The design philosophy (for the 700-series) was different from that for preceding generations of Shinkansen as (engineers) were not focused too much on breaking the speed record,” says Kenichiro Okamoto, 45, of the Kyoto Railway Museum.

Its design as a high-speed train car is so close to perfection that some experts argue the series represents the final stage of Shinkansen’s evolution.

The front face of Shinkansen has changed radically during its more than half-century history. The first Shinkansen I rode on as a child was the first-generation 0-series train known for its bulging nose. Each of the ensuing generations had its own unique front design and earned such sobriquets as “shark” and “iron mask.”

These nicknames signal the special attachment Japanese have for the Shinkansen, regarding it as something more than a railway system.

The 700-series Shinkansen trains will actually remain in service, for the slowest Kodama service, which involves stopping at every station, on the Sanyo Shinkansen Line between Shin-Osaka and Hakata stations. But they are now retired from the Tokaido Shinkansen Line’s Tokyo to Shin-Osaka section, the most important and profitable part of the entire Shinkansen network.

If the 700-series trains are compared to company employees, they could be described as devoted corporate warriors who have retired from the front line of business.

The 700-series deserves to be praised and thanked for its long, 21 years of steady performance, which have laid the foundation for the 700 family’s glory and prosperity.