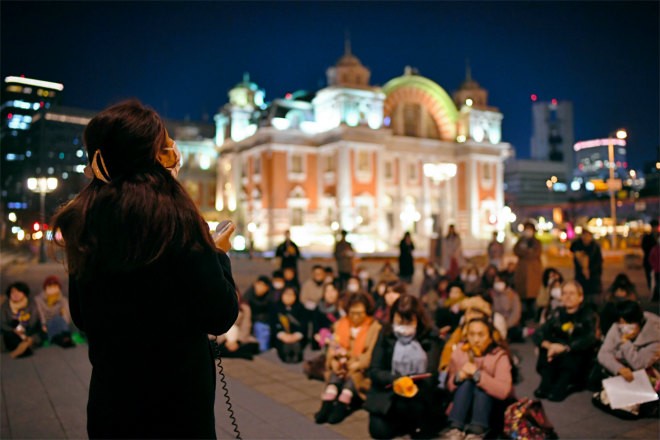 A woman talks about her sexual violence experience at a “Flower Demonstration” in Osaka’s Kita Ward on March 8. (Tatsuo Kanai)

A year of monthly rallies held to end sexual violence against women and injustice wrapped up on March 8 with demonstrations held around the nation, but organizers vowed to continue the fight.

The organizers had indicated that the “Flower Demonstrations,” held on the 11th of every month, would be suspended following rallies in all 47 prefectures on International Women’s Day on March 8.

“Today marked an end of a chapter of the (movement), but it is not the end,” said Minori Kitahara, 49, an author and one of the organizers of the demonstration in front of Tokyo Station. “Now, it’s society’s turn to change.”

The rally was livestreamed, and Kitahara talked to people at other demonstrations via the internet.

“We will continue holding the rallies from now,” Kitahara and other organizers pledged.

The Flower Demonstrations originated in April 2019 in Tokyo as a grass-roots activity by people who were shocked and incensed by a series of not-guilty verdicts issued in sexual abuse cases.

One notable trial ended with the acquittal of a father who was accused of raping his 12-year-old daughter in Shizuoka Prefecture.

The movement has spread nationwide mainly through social media.

Although some of the rallies planned for March 8 were postponed over concerns about the novel coronavirus outbreak, the demonstrators gave a loud and clear message.

More than 40 people gathered for the first Flower Demonstration held in front of Chofu Station in western Tokyo in the drizzling rain.

One woman told the rally that when she was a sixth-grader at elementary school, a drunken PTA chairman suddenly tightened his arm around her. Since then, she has been fearful of men, she said.

For half an hour, participants took turns recounting their haunting experiences of being victimized by sexual violence and abuse. After each testimony, the demonstrators clapped their hands.

“Gathering and talking is very empowering,” Sakie Kuninaka, a 42-year-old organizer of the rally, said. “Let’s create a society together that does not tolerate sexual violence.”

In Yamagata, 15 people, both men and women, attended the first Flower Demonstration in the prefecture on March 8.

In rural areas, community relations tend to be stronger, and sexual abuse victims have an especially hard time reporting the crimes or telling others about their experiences.

Katayama said she hopes the rally would be “the first step to change Yamagata.”

(This article was written by Michiko Kawahara and Yuki Miyatani.)