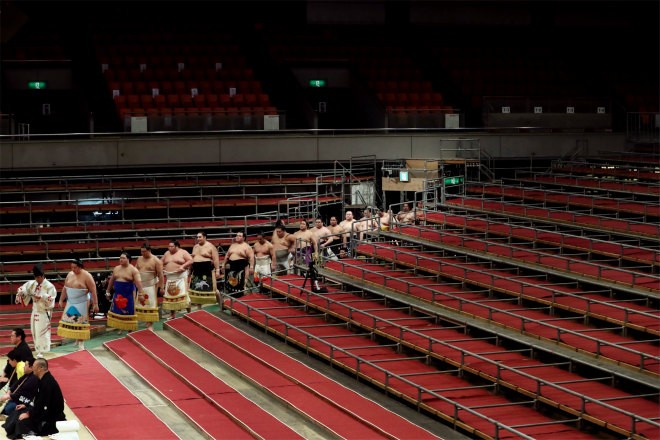 Wrestlers in the makuuchi top division enter the ring to perform a ceremonial ritual at Edion Arena Osaka on the first day of the Spring Grand Sumo Tournament on March 8. (Yuki Shibata)

OSAKA--Like many other sumo wrestlers, Enho's biggest opponent on the opening day of the first tournament held behind closed doors in 75 years on March 8 was himself.

“It’s like I can’t raise my fighting spirit,” said the fan-favorite Enho, a maegashira No. 4, of the bouts at an eerily empty Edion Arena Osaka without spectators due to the COVID-19 outbreak.

“It made me wonder what I’m fighting for,” he said. Enho lost on the first day to Mitakeumi, a maegashira No. 3.

Confusion and mixed emotions filled the minds of wrestlers as the Spring Grand Sumo Tournament got under way.

At the start, Japan Sumo Association Chairman Hakkaku stood in the middle of the dohyo ring and spoke to the nationwide audience watching through a live TV broadcast.

“We will make every possible effort to pull through the next 15 days, hoping the power of sumo provides courage and inspiration to people not only in Japan but also worldwide and helps bring peace and quiet back to the world,” he said.

Usually, the JSA chairman makes the opening speech of a tournament with yokozuna and wrestlers belonging to sanyaku, the three highest ranks below yokozuna, in attendance.

But Hakkaku decided to bring all the wrestlers belonging to the top makuuchi division and stablemasters who are in charge of determining the rankings in the ring, to convey a united front.

NOT BUSINESS AS USUAL

To safeguard against the coronavirus, public transportation was out.

Instead, many wrestlers shared a taxi to travel to the arena from their stables. Some ended up arriving several hours before their bouts.

Re-entry into the arena was not allowed, so dressing rooms were crowded with assistants waiting for wrestlers’ arrival at certain times of the day.

At the yokozuna's ring-entering ceremony, spectators shout, “yoisho!” every time the yokozuna stamps his feet.

But on this day, only the heavy sounds of yokozuna stamping his feet echoed in the arena void of any spectators, except for some JSA members and media and broadcast members.

When an objection to the referee’s decision comes from the ringside judges, the judges huddle together, then a chief judge announces to the fans over a microphone, “Let me explain about the discussion we just had.”

Fans always respond to the ruling with an assortment of boos and cheers.

There was none of that on opening day.

All wrestlers will be required to check their body temperatures each day of the tournament. There were no wrestlers who asked to withdraw due to a fever on opening day.

If a wrestler tests positive for COVID-19, the JSA will immediately abort the tournament.