Japan, U.K. both island nations but only one has ‘James Bond’ 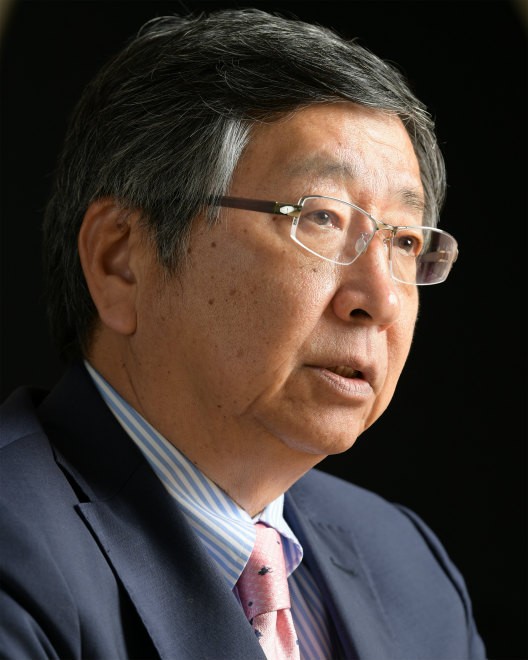 Japan and Great Britain have nurtured strong historical links with each other, both being an island nation in the East and West.

But almost two months after Brexit, how Great Britain’s withdrawal from the European Union affects their bilateral relationship remains to be seen.

There has been a growing pessimism about the future vision of Great Britain. Does the birthplace of parliamentary democracy--and agent 007 James Bond--still offer something for Japan to learn from?

The Asahi Shimbun interviewed Koji Tsuruoka, former ambassador of Japan to Great Britain, who recently completed his three years and eight months term of service and returned to Japan, about his thoughts on these issues.

Tsuruoka was born in 1952. After serving as deputy minister for Foreign Affairs in charge of the economy, he led the negotiations of the Trans-Pacific Partnership (TPP). He served as the ambassador to Britain from 2016 to 2019.

Asahi Shimbun: Japan and Great Britain are both an island nation in the East and West. Having socialized with British diplomats, did you feel a difference between them and Japanese diplomats?

Tsuruoka: In Britain, diplomacy is understood to be especially vital for the U.K. to thrive in a global society. Britain therefore devotes the necessary talent and resources to diplomacy. More than half of the British ambassadors who served in Japan are fluent in Japanese.

Britain has pursued fiscal austerity; yet, they have consistently attained an approximate goal of spending 0.7 percent of GDP on a budget for ODA. The goal was set at the U.N. General Assembly in 1970, and Britain has spent about 14.5 billion pounds (2 trillion yen, or $18.7 billion) in 2018.

In Japan, the budget for ODA exceeded 1.1 trillion yen at a peak period in 1997, but it had dropped to a range between 500 billion yen and 600 billion yen over 20 years. Now it accounts for about 0.1 percent of the GDP.

Q: Do you anticipate Great Britain’s downfall in the post-Brexit era?

A: Today’s international community has witnessed significant changes and framework shifts. Mega companies like Microsoft and issues discussed at the Davos Forum, which is not an international meeting between countries, have carried more weight, for example.

It has been said that "Britain is done” or “it has declined.” But I think we have surpassed the “ups and downs” phase and entered into a new dimension.

Q: As is evident in the James Bond movie series, Great Britain indeed exudes an image of being information smart.

A: There are very few news organizations that do not have a correspondent in London. I think it is because London is extremely important as a base to source value-added classified information. Such information has leverage far superior to national strength. In terms of values that Britain has embodied and its proposals of institution building, Britain’s global power to spread information and influence cannot to be underestimated.

Q: It seems you have thought that Brexit would be an opportunity for the two nations to rebuild the bilateral relationship since your tenure as ambassador of Japan to Great Britain.

A: The international order has been exposed to crises in an environment marked by the emergence of U.S. President Donald Trump, who keeps his distance from international cooperation, and the rise of China, which has strengthened its economic and military influence. The situation is anything but OK to leave things as they are. The EU puts together a political platform by the consensus of 27 member countries. So, their approach tends to please everybody and be ambiguous. Britain, after exiting from the EU, will have its own views regarding not just economic but also political and security issues.

Q: How do you think Japan and Britain should handle President Trump’s “America First” policy?

A: Each of the two nations has a relationship with the United States much deeper than any other country. It is important for the two nations to prevent President Trump’s reaction from negatively affecting the global order, keeping in mind our common target that the world’s further prosperity and stabilization are also essential for the prosperity of the United States. Japan and Britain are both maritime nations and share common challenges. Therefore, the two nations’ joint action carries a greater potential. Britain, since it decided to leave the EU, must have recognized the importance of Japan and its great value to be utilized.

Q: Do you want to have Britain join the Trans-Pacific Partnership (TPP), which took effect without the United States?

A: For Japan, Britain’s participation in the TPP is a big welcome. If Britain wants it, we will provide every possible cooperation to realize it. We have told that to Britain, but Britain’s stance is to be determined. Joining the TPP requires approval of all 11 member countries. I think it makes more sense for Japan and Britain to aim to sign a bilateral free-trade agreement first.

However, if Britain’s tariff rate to Japan were higher than those of other countries, Japan would not agree to sign a bilateral free-trade agreement with Britain. For instance, Japan has abolished automobile tariffs, while the EU that includes an automobile-manufacturing member country who gets a say has imposed a 10 percent tariff on completed vehicles outside the region. Would Britain let it go at that after leaving the EU? Or, would Britain open markets by signing a bilateral free-trade agreement?

Q: Some experts in Japan have maintained a persistent demand for bringing back the Anglo-Japanese Alliance, which was formed in 1902 and remained in effect during the Meiji and Taisho eras. But Britain has not jumped at the opportunity.

A: Japan and Britain are this much distantly positioned, and (because of independence from colonialism and other factors) Britain doesn’t have a territory in East Asia. Entering into a security alliance with such a nation is not a realistic measure. The two nations have built a very stable relationship, however, which can survive changes in political administrations. I think it is enough for the two nations to jointly act on common practical challenges. For example, Japan and Britain are one of the few nations that have realized a health-insurance system that covers all of its citizens. We can cooperate with each other to encourage healthy physical preparation that is essential for human survival. Rather than just discussing security, putting comprehensive cooperation into practice will lead us to greater benefits.

Q: Prime Minister Boris Johnson has been called a British version of Trump. Do you think Johnson is a populist?

A: I had met him several times when he was foreign secretary. He is a quick-witted, unique and interesting person. Being a typical child of aristocracy and elite society, he has no qualms about his own lifestyle and social position. I think he has been thinking about his political stance from a viewpoint that what is most important for him to become the prime minister since he entered politics. When he was mayor of London where many residents supported the idea of staying in the EU, he supported it, too. But he became a flagman of the movement to leave the EU during the national referendum on Brexit. I don’t see him as a populist in the sense that a populist caters to the wishes of the public.

Johnson’s Conservative Party won a majority in the general election in December. It was the most massive victory for the party since the days of Prime Minister Margaret Thatcher, and Johnson has gained a stable political base. With that many seats won, it is unlikely for him to disband parliament. Johnson is expected to rule the majority for the next five years, a tenure for a member of the House of Commons. He is not necessarily required to push things hastily. I think he will first focus on handling the challenges regarding the EU.

Q: The British parliament strayed off course over Brexit, but British politicians are more eloquent than Japanese politicians.

A: Oratory is, more than anything else, the lifeline of British politicians. Do they have a way with words? Can they correctly point out a problem, explain it to the public and present a solution? If they have not reached a certain level in such ability, they will not be granted official recognition from the two major parties. Even a rookie lawmaker has an excellent speaking ability to impress the audience. In Japan, on the other hand, oratory is not a decisive necessity to become a politician. They don’t have to say much in public because they are evaluated based on an aura of weight created around him or her. I think evaluation standards are set differently in Britain and Japan.

Q: Former Prime Minister Theresa May was the second woman to serve in the top position. Britain is far ahead of Japan in terms of women’s full participation in society.

A: The right to vote in Britain was initially granted only to men of a wealthy class. Through fierce suffrage movements, disenfranchised women have gained the voting rights and advanced into society. Their participation in society has yielded tolerance to diversity. The secretary-general of the Confederation of British Industry (CBI), equivalent to Keidanren (Japan Business Federation), is a woman. The head of the Royal United Services Institute, a political think tank on international defense and security, is a woman, too. It is not uncommon for a woman to assume a top, leading role in society.

In Japan, when an idea regarding women’s issues is presented, it is dismissed on a reason that “it is not a do-or-die issue.” People in Japan may be submissive. But women’s advancement in society is absolutely necessary for Japan to realize diversity. Japan should learn from Britain to promote women’s full social participation, including implementation of a semi-mandatory system. I believe it is surely beneficial to Japanese society as a whole.

Q: Relationships between politicians and bureaucrats seem very different in the two nations.

A: I retired last year. In my approximately 43-year career, I spent half of the time on the Diet and related clerical works. In Japan, the Diet is expected to be prioritized over anything as a premise. In Britain, in contrast, bureaucrats rarely attend the Parliament, except parliamentary secretaries to ministers. In many cases, they don’t hold a practice run for ministers responding to questions in the parliament. Not all but only major ministers attend a debate of party leaders. Most countries in the world have adopted this British style. Japan is extremely particular. With the premise of the Japanese Diet system, the British parliament system looks completely different. I was surprised on many occasions. Importing the British system in a superficial way would not function. We have to think seriously if such an import is proper.

Q: Britain does not have a codified constitution. Instead, it has an unwritten constitution consisting of various parliamentary resolutions, laws, treaties and judicial precedents.

A: Britain is very flexible, but it has an undeniable rule of law that has been built up and created as the outcome since the Magna Carta, which limited the royal power. I think it is important to look at the conflicts between politicians and bureaucrats through existing practices and how they have played roles. It is necessary for politicians to respond flexibly and make a swift-handed decision when they tackle a difficult challenge. But a politician can in no way be a tyrant. Britain, a nation of discussion, is also a leading country in such politics. Not a few people including experts say things like, “Britain is washed up already,” and, “It’s been in a woeful state and there is nothing to learn from.” I would say to them, "No, Britain is far from that." I believe Britain still offers many things that we can learn from.

(This article is based on an interview by former Asahi Shimbun European Editor Tsutomu Ishiai.)