EDITORIAL: Full records of official response to coronavirus should be made 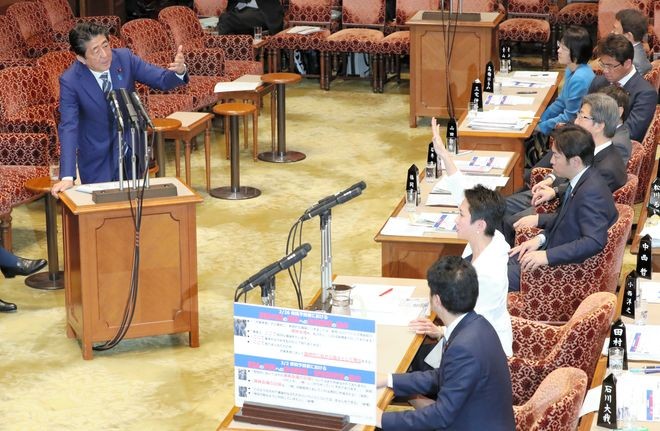 It is hardly surprising that the government’s policy responses to this hitherto unknown virus have been an awkward process of making many mistakes and struggling to learn from them.

That makes it all the more imperative to keep full and accurate records of the entire process to provide lessons for the future.

In a March 9 Upper House Budget Committee session, Prime Minister Shinzo Abe indicated that the government will designate the new coronavirus epidemic as a “historic emergency situation” as defined by the guidelines for managing administrative documents.

The step will make it mandatory to record the minutes of all conferences where policy decisions are made and preserve related materials.

Abe’s promise represents a step forward toward better management of official documents given that the administration has been criticized for falsifications and sloppy handling of official documents in scandals including those involving school operators Moritomo Gakuen and Kake Educational Institution and annual cherry blossom viewing parties hosted by the prime minister.

The records concerning the government’s decisions and actions in response to the infection should be adequate and reliable so that they measure up to the standards required for vigorous and objective evaluations afterward. The government should not be allowed to define the scope of the records at its own discretion.

In responding to the epidemic, Abe has made “political decisions” that seriously affect the people’s lives without showing scientific grounds for taking the radical steps, including calling for the cancellation of large-scale events and nationwide school closures as well as imposing tighter restrictions on the entry of people from China and South Korea.

These decisions have left the public wondering what kind of information they were based on and how their advantages and disadvantages were actually assessed.

In a recent news conference to ask for public support for the battle against the virus, Abe said political leaders have to take responsibility for their decisions and actions.

“I have no intention whatsoever to try to escape from that responsibility,” he said.

If so, the records should cover the entirety of the administration’s handling of the crisis including the process of his own decision making.

The government has clearly failed to do a good job of keeping the records of its responses to the situation, showing a lack of awareness of the importance of this task.

While it has published gists of the minutes of meetings of the government’s epidemic response task force, there have been no records made of special meetings of the prime minister and key Cabinet members responsible for the mission where they adjust opinions on policies before they make final policy decisions at the task force meetings.

As for the three meetings of the expert advisory panel that have so far been held, stenographic records have been made only for one. Such records were not made for the remaining two meetings because they were held on holidays and no stenographers could be hired, according to the government.

It is surprising to learn that not even audio recordings of the discussions at these meetings were made. The government should be accused of negligence if that is really the case.

In the aftermath of the 2011 Great East Japan Earthquake, the Liberal Democratic Party and Komeito, the current ruling parties that were in opposition back then, bitterly criticized the government led by the then Democratic Party of Japan for failing to keep the minutes of meetings of 10 of the 15 policy councils to discuss responses, including those of the Nuclear Emergency Response Headquarters.

Now, the two parties of the current ruling coalition are facing the huge pressure of the criticism they leveled at the DPJ-led administration at that time.

The ruling parties have the responsibility to ensure that the government keeps thorough records.

The Diet is expected to pass this week the government-drafted bill to expand the scope of a law that took effect in 2013 to cope with outbreaks of new types of influenza and other infectious diseases to give the prime minister more power to deal directly with the coronavirus epidemic.

When the law was enacted eight years ago, the Upper House adopted a supplementary resolution demanding that the government make, preserve and publish records of its decisions and actions made and taken under the law.

Such records are not just for future evaluations of the responses. It is vital to publish them swiftly to win broad public support and understanding for the measures the government is taking.