The York Benimaru Shin-Tomioka supermarket reopens for business in 2017 when the evacuation order was lifted in Tomioka, Fukushima Prefecture. (Video footage by Shoko Rikimaru) 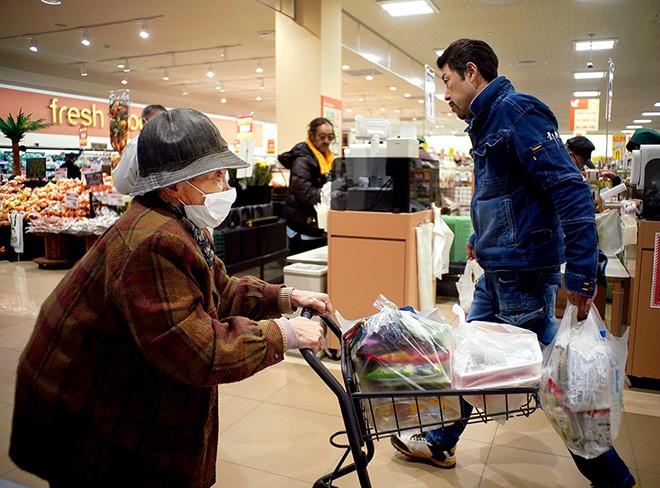 Workers pass by an 85-year-old woman living alone who likes to shop in Tomioka, Fukushima Prefecture, on Feb. 12. (Shigetaka Kodama)

TOMIOKA, Fukushima Prefecture--When the evacuation order was lifted here three years ago for residents to return home after the 2011 nuclear accident, local officials thought a supermarket would be a welcome sight.

Initially, the York Benimaru Shin-Tomioka grocery store had shelves filled with items catering to the tastes of local residents such as fresh seafood--flatfish, horse mackerel and sardines.

Today, they are filled with side dishes that pair well with alcoholic drinks such as grilled squid and “satsuma age” (fried fish cakes). The liquor area is 1.5 times larger than similar areas in other supermarkets, with many giant 4-liter bottles of alcohol including sake and Torys whiskey neatly lined up.

Instead of returning residents, about 80 percent of the store’s customers are transient, involved in decommissioning the crippled Fukushima No. 1 nuclear power plant, and decontamination and reconstruction work.

A 27-year-old man who lives in a nearby dormitory moved here from Niigata Prefecture in November 2019 to do decontamination work. He comes to the supermarket, the only grocery store in Tomioka, almost daily to buy sake and fried chicken.

“I came here to make money,” he said. “There are no people and no places to drink. I wouldn’t choose this town if I had to live here with my loved ones.”

The man plans to move to another place to work at the end of March.

Futaba county in Fukushima Prefecture, which consists of eight municipalities including the town of Tomioka, hosts the Fukushima No. 1 nuclear plant where the Great East Japan Earthquake and tsunami on March 11, 2011, triggered a triple meltdown and the evacuation order. The county also hosts the No. 2 nuclear power plant.

Three years ago, the Tomioka town government decided to reopen the supermarket with an investment of 3 billion yen ($29 million). Town officials believed that the resumption of their familiar grocery store would be a welcome symbol of a return to normalcy for returning residents.

Before the nuclear accident, about 16,000 people resided in Tomioka. When the evacuation order was lifted, town officials expected that the number of returning residents would be between 3,000 and 5,000 people after two years.

However, only about 1,200 people now live here, not even 10 percent the population before the nuclear disaster.

Tomioka Mayor Koichi Miyamoto estimates that the total population of the town will triple if it includes temporary workers.

“I wonder how we will be able to welcome such workers as our permanent residents in the future,” asked Miyamoto, 73.

The mayor admits it will be difficult for the town to survive without nuclear power plants.

Tomioka resident Teiko Watanabe, 72, who lives five minutes from the grocery store by car, sometimes hesitates to shop there.

“I feel all alone because it is a supermarket for workers,” she said.

Before the nuclear disaster nine years ago, Watanabe lived with six family members of three generations while farming “satoimo” taros and “hakusai” napa cabbages in a garden.

After the nuclear accident, she was forced to evacuate from the town for eight years. Only she and her 79-year-old husband from her family returned to live in Tomioka.

Usually they do their shopping in Sendai where their daughter lives.

Hide Ito, 84, who lives in public housing for disaster victims with her 89-year-old husband, uses the supermarket in Tomioka.

At the supermarket in Tomioka late one recent evening, shoppers wearing work clothes and with towels casually draped around their necks stand in line at the cash registers.

When resident Osamu Mochizuki, 80, shops at the supermarket for dinner, he murmurs in his mind to the workers, “Thank you for your efforts.”

He bought a home and his daughter was born. Along the bustling national road leading to the nuclear plant, drugstores and electrical appliances shops opened in succession.

“The town was active, convenient and an easy place to live,” Mochizuki said.

Six years after being evacuated, Mochizuki did not hesitate to return to Tomioka. He thought that every other resident would come home as well.

But today, around his house, vacant houses sit amid overgrown vegetation and for sale signs are posted everywhere. New housing construction is only apartments for workers who live alone.

But his daughter and young grandchild living in Tokyo have not visited him yet.

“Thanks to Tokyo Electric Power Co. (operator of the Fukushima No. 1 nuclear plant), I was able to make a living for a long time. I can’t clearly say the company is bad. However, I also think that my life was derailed due to the nuclear accident,” said Mochizuki.

A handwritten message by his grandchild was displayed on a wall in a room next to the entrance of his home. It reads: “Grandpa, happy birthday for turning 80 years old.”

Mochizuki felt his first grandchild's growth through the words written with colored pencils.

“Was it a mistake to return here?” he suddenly thought.