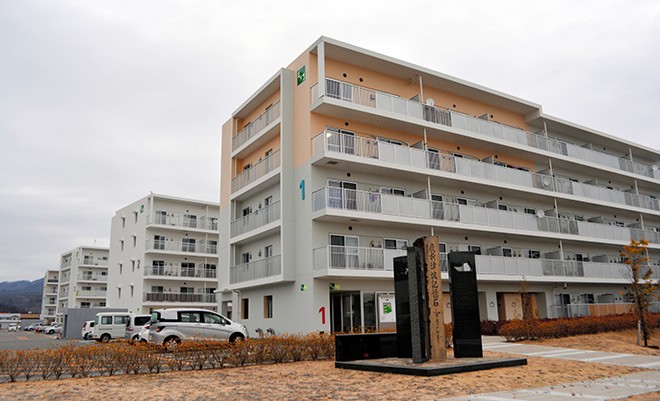 Public housing for victims of the 2011 Great East Japan Earthquake and tsunami, in Kesennuma, Miyagi Prefecture, in January (Hideaki Ishibashi)

Men forced to evacuate by the 2011 quake, tsunami and nuclear accident are more likely to commit suicide when they are in a “reconstruction phase” due to a lack of financial and other support, two studies found.

The findings suggest a need for long-term care for victims.

Suicides by male evacuees who were faced with moving out of shelters topped the national average, one study showed.

A similar trend was observed in another study of male evacuees who had to decide whether to return to their homes near the stricken Fukushima No. 1 nuclear power plant following the lifting of evacuation orders.

“Putting in place measures to help prevent suicides will be all the more important for victims when they move on to the stage of reconstruction,” said Masatsugu Orui, a psychiatrist at Sendai’s social welfare and public health center, who conducted the studies. “We need to support victims based on their needs arising from their personal situations.”

In one study, he tracked the suicide rate per 100,000 people among 12 coastal cities and towns and two wards in Sendai in Miyagi Prefecture based on National Police Agency statistics.

All the areas were hard-hit by the March 11, 2011, Great East Japan Earthquake and tsunami.

Orui found the average suicide rate for men in those locations was below the national average, but exceeded it in 2013.

In 2014, the rate returned to below the national average. But in 2015 it topped the average once again.

As for women, the figure in the coastal communities surveyed had remained unchanged. But it went up in 2018.

Previous research showed that the suicide rate in the aftermath of a disaster known as the “honeymoon phase” declined due in part to a growing sense of solidarity among victims.

But it increases during the “disillusionment phase,” when gaps occur between those who are able to recover and those who are still struggling to do so.

Orui said special attention should be paid to the situation of victims in the years from 2016, when these evacuees have been in the reconstruction phase.

Since 2016, victims in the disaster-stricken communities have been obliged to move out of free temporary housing.

They were left with two costly options: building their own houses or moving into new public housing, which even if it could be secured for at a relatively low rent, posed an obstacle for some financially strapped evacuees.

“Victims likely felt increased stress with the end of financial support, as they struggled to endure their situation,” Orui said.

Orui said moving into a new home, whether their own houses or public housing, also added to the burden of victims as their newly forged ties to others in temporary housing would be severed.

In Fukushima Prefecture, the male suicide rate has exceeded the national average since 2015 in eight municipalities where evacuation orders were lifted between 2015 and 2017, Orui's research showed, based on reports on demographic statistics by the Ministry of Health, Labor and Welfare through 2017.

The evacuees were driven to take their own lives as they “were most likely distressed by what to do over their return to their hometown or by the absence of acquaintances after they returned,” Orui said.

Orui called for assistance programs to be set up in which “gatekeepers” would be nurtured to monitor vulnerable evacuees and encourage those who tend to stay home all day to mingle with others and get involved in their communities.