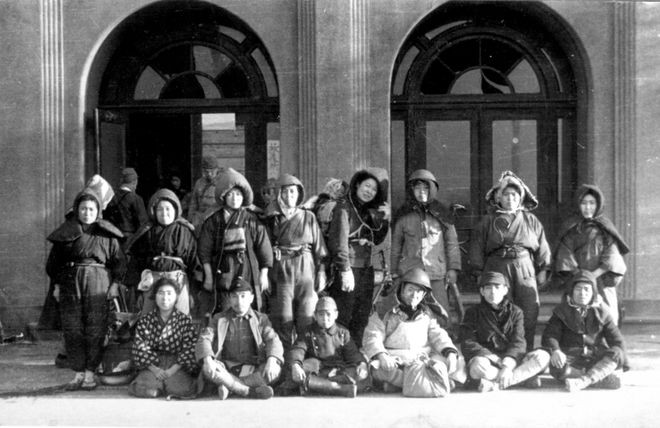 This photo taken in the early morning of March 10, 1945, on the west side of Ryogoku Station in what is now Tokyo’s Sumida Ward depicts members of a neighborhood association who survived the Great Tokyo Air Raid. The late Kiku Kato, fourth from right in the back row, had the young Masahiro strapped to her back. The man, third from right in the front row, is the late Goro Kato. (Provided by Keiji Kato, Goro's oldest son)

The infant in the photograph taken on the day of the Great Tokyo Air Raid is now 76 years old, forever grateful for his mother's actions that saved his life that day in 1945 and now, all these decades later, a fierce advocate of peace.

The image taken in Tokyo’s Sumida Ward depicts some of the survivors of the conflagration that claimed 100,000 lives and obliterated whole neighborhoods of the capital through incendiary bombing.

Early in the morning of March 10, 1945, members of the wartime “tonarigumi” neighborhood association in the Higashi-Ryogoku district fled to a concrete bunker to escape the ferocious bombing by U.S. forces.

When they emerged from the shelter, they encountered charred corpses in the smoldering ruins.

Local resident Tetsuro Kudo, then aged 54, ran a photo studio in the district. Kudo, who died in 1971, had a rare roll of photographic film in his possession. He contacted an architect friend named Goro Kato, then 37, who lived nearby and died in 2001, and said: “I have photographic film. What do you think I take?”

Kato suggested to Kudo that he use his Leica camera to snap a “photo of those who have survived.”

Goro's wife, Kiku, then aged 36, is in the middle of the photo with a baby strapped to her back. The child was Masahiro, her youngest and third son, then 18 months old. His mother died in 1998.

Masahiro, now 76, lives in Osaka’s Nishi Ward. He joined Japan Airlines Co. in November 1964, a month after the Opening Ceremony for the Tokyo Olympics, and went on to forge a career as a commercial airline pilot.

He was astonished to see high school students driving cars when he went to California for crew training. The prosperity in America compared with Japan at the time took his breath away.

Masahiro became a copilot in 1968 and a captain in 1974 flying on international routes. He also served as an instructor in JAL's personnel development department.

Masahiro remembers nothing about the wartime period, but he recalls being told by his mother when he was in elementary school that he “didn't utter a sound" while she was seeking safety from the air raid, "apparently because you realized something was wrong.”

His father and others also shared a memory of Masahiro's mother, with her son strapped to her back, washing the swollen eyes of a man in a field cap with milk from her breast in the aftermath of the air raid.

Masahiro, having not looked at the photo of his childhood neighbors in ages, described his experiences of having been able to fly all over the world as “really fortunate” and expressed deep appreciation for his parents.

“I want to say thank you to my father and mother from my heart, because they desperately struggled to survive,” he said.

Asked about the peace that has prevailed in postwar Japan, Masahiro expressed his happiness that small children and others had never experienced warfare.

“I pray such a tragedy will never be repeated in the future,” he said.