Slow-evolving elephant sharks born in Japan for the first time 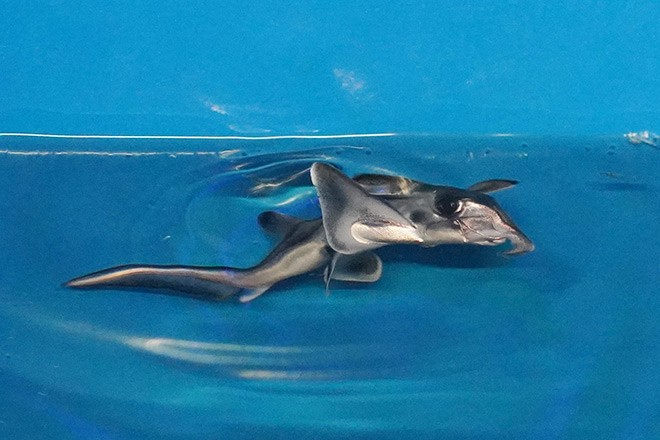 A Jan. 31 photo of a 5-day-old elephant shark born at the Sunshine Aquarium in Tokyo’s Toshima Ward (Nobuo Fujiwara)

Elephant sharks, deep-sea “living fossils” believed to have remained relatively unchanged for 400 million years, were born in Japan for the first time in a towering building in downtown Tokyo.

The babies, hatched at the Sunshine Aquarium in Toshima Ward in January and February, are doing well, aquarium officials said. If the fish remain healthy, they will be shown to the public.

Elephant sharks live at a depth of about 200 meters mainly in waters around South Australia and New Zealand. They search for food on the seabed with their prolonged snouts and swim by moving their large pectoral fins.

Despite the intimidating name, the body length of an adult elephant shark is only about 1 meter.

Another aquarium in Osaka also keeps the odd-looking creatures.

Sunshine Aquarium staff visited facilities in southeastern Australia and obtained six elephant sharks in March last year. They were put on display at the aquarium.

The female elephant sharks produced 18 eggs in May.

One tricky part was how to manage the water for the eggs because not much information is available about the fish.

The staff members placed half of the eggs in water at a temperature of 12 degrees and the other half in 15-degree water.

All nine eggs died in the warmer water. The remaining eggs were checked through echo tests.
In late January and early February, four babies were hatched, and they all looked like 15-centimeter versions of their parents.

“It was very difficult to hatch them because of so many unknown things,” Kazuhiro Takamiya, a 45-year-old curator at the aquarium, said. “We hope that we can display them to visitors as early as possible.”

Elephant sharks have an even slower evolution speed than the coelacanth, according to a study announced by the University of Washington School of Medicine in 2014.